I was sitting in mcsorley's. outside it was New York and beautifully snowing. Inside snug and evil. —e.e. cummings

Well I was sitting in McSorley's Old Ale House one quiet Sunday afternoon last month, with The New York Times. The Gay Pride parade crashed by, down Fifth Avenue. The pride was endless this year, and the parade was too. I had by some miracle somehow forded Fifth from the east to make my way into McSorley's, on the west. I hoped to read my paper there. But it was too quiet.

Four guys quietly mourned one guy's layoff at one table, a couple of guys talked baseball at another, and this guy, standing at the bar, asking me if I had the crossword puzzle. I was sorry to say I did not. 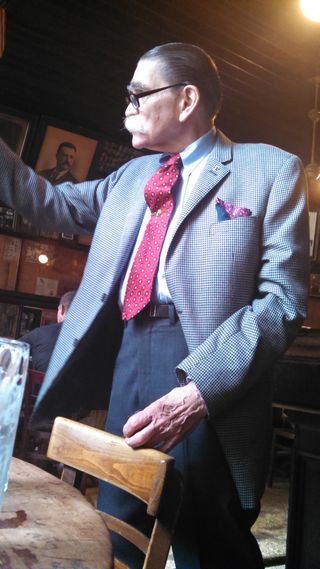 A happily married man who says that if anything ever happens to his wife, he will look for someone with large breasts who enjoys banana-based desserts as much as he does.

Another man who, when he feels the need to have a bowel movement on the highway, drives past all the grubby rest stops in search of a sign with a blue H. He walks right into the front door with his paper under his arm and asks the first nurse he sees, "Where's the Men's?"

A woman who is so terrified of dental problems that she insists the doctor use a "map metaphor" when explaining to her the condition of her teeth. When the doc gets too specific, she becomes agitated, reprimanding him to speak "in continents, not countries!"

A man who thinks of poems but can't be bothered to write them down, "because they're already finished, in my head." He assures me, "Some of them are pretty good."

A woman who frequently wakes up at four-thirty a.m. feeling hungry, eats a bowl of cereal and returns to bed.

A man who named his baby son Clark Kent.

A man who refuses to eat at a restaurant any closer than a block away from a gas station.

A man who was once so hung over, he checked himself into the hospital. (This is not the man who goes to hospitals to crap.)

A man who has a favorite restaurant for fights with his wife.

A professional speechwriter named Lucinda Holdforth, who is currently kicking a giant corporation in its corporate balls.

A tattoo-covered skate punk who doesn't drink coffee on days he's working as a messenger, because, "It makes me go poohpooh."

A peace-loving liberal amputee who frequently becomes infuriated at the disappointment people show when they learn he didn't lose the leg in a war.

There's plenty more room, as you can see.

Who else should we invite?