Tanith Lee died last month. You probably never heard of her, but she rated a New York Times obit for her fantasy and horror novels. In a note to her readers before she died, she wrote of the writer's immortality:

"Though we come and go, and pass into the shadows, where we leave behind us stories told—on paper, on the wings of butterflies, on the wind, on the hearts of others—there we are remembered, there we work magic and great change—passing on the fire like a torch—forever and forever. Till the sky falls, and all things are flawless and need no words at all.”

Do you believe that bullshit?

When I was in college, I wrote in an early journal that I wouldn't be satisfied with my writing career even if I turned out to be the next Shakespeare.

Forgive me. (And know that I was probably right.)

Architects have buildings to show. Teachers have alums. Ditch diggers have ditches.

What do writers have, 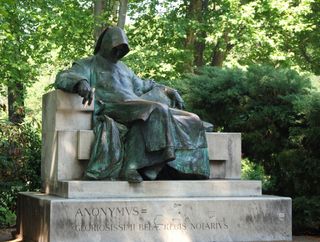 aside from this weird statue of the "Anonymous Writer," in Budapest, Hungary? We have a closet full of yellowing clippings, an Internet scattered with dated references and mostly forgotten stories.

By the time I was in my mid-twenties, I understood what my publisher Larry Ragan—one of the best writing stylists I've ever read—meant when he mused at length at the unexpected and outsize joy he felt upon meeting someone at church and discovering the man had read and enjoyed an obscure magazine he had edited decades before. A random man. An obscure magazine. An old editor, happy for one evening.

How do writers measure their worth?

I quote Mike O'Malley, another dead and forgotten writer—he an erudite speechwriter I knew who also wrote novels, I think—in a (free) white paper I wrote for the Professional Speechwriters Association, "What Is a Speechwriter?"

The last essay in O’Malley’s book quotes a William Gass novel, Omensetter’s Luck. In it, a preacher prepares for a sermon, confident in the knowledge that “there’d be land in the shape of his syllables, a sea singing, a sky like an echo, plants in bloom burning with speech.”

O’Malley writes that speechwriters make “hard ideas in hard words, easy ways out in soft words, clarion calls in trumpets of words: the ideas are as real as cliffs rising out of the sea.

We plant them here and there, at times scattered widely, at times a paragraph as laced with quiet bloom as a floral centerpiece. We are at once the garden, the resident, the passerby: we string a verbal landscape with occasional jewels.

No one is recording these speeches. There are no books of them that readers save and treasure. Our files will be tossed on the scrap heap when we leave or retire.

But we have been sitting at a typewriter making land, a sea, a sky, burning words. That’s enough. It is more than most have.

Do you believe that bullshit? If you are a writer, you must.

The question is, do you dare to believe in more?