Every parent thinks he or she is better than most other parents in most ways. I'm no exception—except I'm right.

And the ways I'm worse than other parents? Those are quirks that will build Scout's character. Little peccadillos of mine that will help make her point of view unique, and provide her with nutty little anecdotes to toss off to remind boyfriends and bosses that they've got a true original on their hands.

(She already has a series of stories that she tells on the theme of "My dad was so dumb when he was in college." You don't tell them about the arson charge, do you? "No, Dad. Not the arson charge.")

See? I'm the perfect parent. Happy Father's Day to me!

And even I am confused about how to handle one question. And if I'm confused, you must be too.

The question of work. What do you tell them about your work?

If could magically give my daughter one gift in life, it would be that she finds a meaningful kind of work that can lead her through a lifelong career (however serendipitous the path). Having meaningful work takes you through thick times and thin—guides you, distracts you, satisfies you Monday, Tuesday, Wednesday, Thursday, and Friday.

If you're not afraid of work you'll be okay, and if you like to work you will be happy. And if you don't? Well, you're in trouble and I feel sorry for you, even if you've got a billion dollars.

I've been given this work gift from the heavens. Wait, was it from the heavens? Or was it from my parents, both writers—and especially my dad, who talked about his work running a small advertising agency in Ohio, with surely no less frequency or gravity than President Obama talks to Sasha and Malia about his daily chores.

Before I was Scout's age, I knew every client my dad's ad agency had, which writers were assigned to it and who was succeeding and who was fucking up. Who was boring my dad in meetings, who was taking credit for my dad's work, who was spending too much on the expense account and who was carrying the agency on his back. I may have not known all of those things, but I knew most of them. I knew enough to exult when the agency lost the Brown Derby restaurant account, because the client was a crazy asshole.

Knowing that stuff at eight, nine, 10 strikes me as insane now—I was always dad's only real guy friend, which is also insane—but I bet I learned an awful lot from all that premature work talk. Most of all, I learned that work was an important way to make meaning in life.

Yet, it has not been my instinct to have Scout read a lot of my stories, or to regale her with yarns about all the interesting speechwriters I know (though I have introduced her to a few). And she doesn't seem to give a natural shit about it, either. Last week I put in front of her a magazine article with my mug on it and a headline, "The Speechwriters' Shepherd: David Murray gathers wandering professionals into a coherent community." 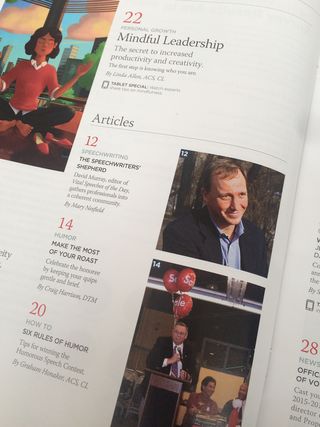 She saw my picture, and said, "cool," and put the magazine aside. She's seen my name in a lot of magazines and newspapers, and my picture in a few too. She thinks I'm famous, but has absolutely no sense of how famous, on a scale from Bruno Mars to Uncle Mike (of Uncle Mike's Cafe, around the corner). She knows I write and that I deal with speechwriters, but that's about it. She knows I have a blog and that some people read it and sometimes they think she's amusing on it. And if I'm writing about something less esoteric than communication, I'll tell her about that, too.

But she knows me only as the greatest historian, oral reader, tennis player, golfer, bicyclist, motorcyclist, milkshake drinker and comedian she has ever known, not to mention farter.

I decided to read Scout excerpts from this piece (in Toastmaster's magazine, The Toastmaster), just because it seemed like an economical way to show her how her giant father neatly fits himself into one tiny place in the world. She ought to see how that is done.

But as for the larger task of sharing my work with her, I don't exactly know how to go about it. Because—like taking her to hear black Baptist preachers around town—I think I ought to do it, I've always intended to do it, but it doesn't come naturally.

Does it to you?