But occasionally I publish—in its entirety, and unadorned with comment from me—a speech that I disagree with and that I think is dreadfully written. Why? Because I think history ought to remember it as an example of our discourse.

Take a speech I just received this week, by Robert Dilenschneider.

Anyway, for five decades Bob has been a BIG DEAL. He worked at Hill & Knowlton in the 1970s and bossed it in the 80s and into the 90s. Since then he has operated The Dilenschneider Group, counseling and shilling for a list of clients he describes as "major corporations, professional groups, trade associations and educational institutions, and has assisted clients in dealings with regulatory agencies, labor unions, consumer groups and minorities, among others."

(I should probably confirm this, but I'm going to guess that those clients are listed pretty faithfully in descending order by amount billed.)

Bob has the likes of Henry Kissinger over to his house for cozy lectures, and he told the Stamford Advocate two years ago that his firm "represents one-third of the Fortune 500 companies and has participated in six of the largest mergers and acquisitions deals in the past 20 years. 'We've represented six of Fortune's 10 toughest bosses,' Dilenschneider, a Darien [Conn.] resident, said."

(or is it an oil painting?) that he uses on his bio page is at least 20 years old. Below is what Bob really looks like now 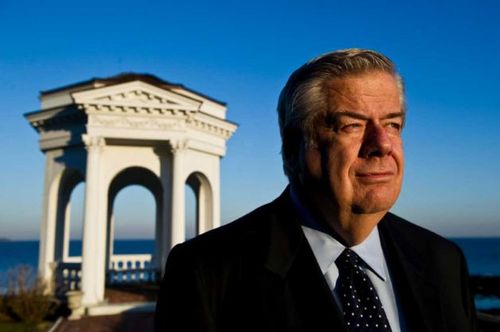 (he is pictured at his home, looking like he thinks he looks like absolute badass, which as any image consultant will tell you is half the battle).

This speech Bob gave—perhaps he conceived it in that ancient Greek gazebo there—I'm publishing it because it addresses an important issue, and argues for a clear solution, which is much more than I can say for many of the speeches I receive and reject at Vital Speeches.

The issue is, the effect that the global financial crisis had and is having on the millennial generation. Around the world, millennials with college educations can't find jobs. As a result, "Mental depression is becoming a serious reality among millennials, who feel the recession may have knocked them out of the game and they may never get firmly on the job track. More than one in three young adults still live with their parents."

I genuinely appreciate Bob taking the issue on directly. Global unemployment among twenty-something college graduates does qualify as a vital problem, so any speech on the subject is by definition a Vital Speech. It's only when Bob begins to lay out his solutions that the speech begins to lose its vitality:

What can be done to put people in the United States and overseas back to work? For starters, we must keep at bay the Fed’s appetite for greater and greater control of every aspect of society, roll back the excessive government regulation; put risk, reward and personal responsibility back into the capitalist system and facilitate the creation of new businesses that, in turn create new and better jobs. Right now, taking risks in business too often invites litigation. We must ensure that questionable plaintiffs and their lawyers pay a price for frivolous lawsuits that frequently amount to blackmail.

Where are the new jobs going to be? I would argue that they may be found in healthcare and social assistance (now 18 percent of our economy), construction such as the Keystone Pipeline, educational services, professional and business services, mining, leisure and hospitality, financial activities, the wholesale and retail trade, transportation and warehousing, and state and local government.

But all the shrinking of government, tort reform and environmental deregulation in the world are not going to get these young people into productive careers by themselves! No, you need to help. You need to help by giving advice to the millennials. Sober advice. Here's Bob's advice for the advice you should offer to millennials, wherever you encounter them. (It's best read in the stentorian, radically caucasion voice of a 1950s film strip narrator.)

First, encourage them to shape and create a personal image. Everyone has an image, and that image should change with the times. The right image can bring profound benefits. Image is a basically series of habits you develop and integrate into your personality. Image and an image change require trial and error.

Counsel them to dress like those in the level above their position and not to dress well only when they have an official meeting with superiors. Explain that people judge them every day. It isn’t simply the boss who decides whether you get promoted.

Advise them to always be helpful. Those who get promoted are seen to be genuinely interested in others’ well-being. Few companies want to promote a narcissist. Young workers should also establish friendly relationships in other departments than their own. Those connections may help get a promotion and will certainly be useful after one is promoted.

I would additionally tell them to be energetic: People who get ahead always have an extra tank of energy to switch over to, but they don’t want to seem too animated. And be relaxed. Given the stress and downsizing in the current job market, nobody wants a Chicken Little running around screaming “The sky is falling, the sky is falling!” A relaxed persona will give superiors confidence.

Also, tell them to go the extra mile whatever that mile may be. Maybe the boss, or the boss’s boss, needs a report right away. Volunteering always helps as does developing a reputation for being dependable and productive during crises.

A sense of humor also never hurts. It shows that one can detach oneself emotionally from a situation and look at things objectively.

One must finally be eager to learn. An advanced degree is always an attribute that an organization generally encourages. Often, simply being in an MBA program gives one status and makes people see that individual as a go-getter. On the other hand, if the organization is frenetic and always on the brink of chaos, it might not look kindly on spending time getting a degree. But that doesn’t mean one can’t keep learning more about a company’s inner workings.

Enthusiasm is, incidentally, another positive. Companies say they want to hear employees’ reservations about a project, but they often really don’t. They might label one as negative. The workplace is not a democracy, and freedom of speech should be used cautiously. Getting, holding and progressing in a job takes continual diligence and effort.

People working at all levels are what make this country what it is.

Yes, including people at Bob's level—the top shelf, where corporate America's "toughest bosses" go to get their public relations advice. And for whom audiences at New York's University Club apparently still sit still, presumably breaking into applause and elbowing one another, Couldn't you just thank God for leadership like that?!

You can read Bob's speech in its entirety in the September issue of Vital Speeches, and decide for yourself:

Would you have published it?