The story went that, in the 1960s, a French auto manufacturer’s cars had earned such a bad reputation for reliability that the company came out with an ad that appealed to people “who swore they’d never buy another Renault.”

My ad executive dad liked the story because it was an example of provocative advertising. My mother liked it because she had once owned a Renault Dauphine. “If a dog piddled on the wheel,” she said, “it wouldn’t start for a week.”

The older I got and the more I came to understand the conservative nature of corporate communication, the more I assumed this story was apocryphal. But with both my parents dead, there was only one way to prove them wrong—to check the story out on the Internet.

“The Renault for people who swore they would never buy another one,” read the full-page headline on the two-spread ad for the new Renault 10, in 1966. The copy didn’t let the headline down.

“We cannot blame anyone who swore they would never buy another Renault,” it began.

When we first sent our cars into this country we ran into a sad situation. We had, as we say in France, sold the skin of the bear before having put him on the ground. 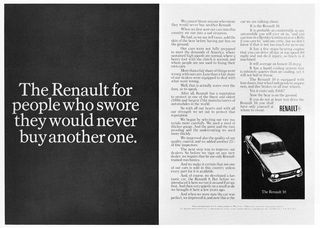 Our cars were not fully prepared to meet the demands of America, where sustained high speeds are normal, where a heavy foot with the clutch is normal, and where people are not used to fixing their own cars.

The ad went on to remind the reader of Renault’s long, proud history. “So with all our hearts and with all our strength we set out to protect that reputation” by creating a better car.

“If you do not at least test drive the Renault 10,” the ad concludes, “you shall have only yourself at whom to swear.”

The result of the ad? This ad, the next year: 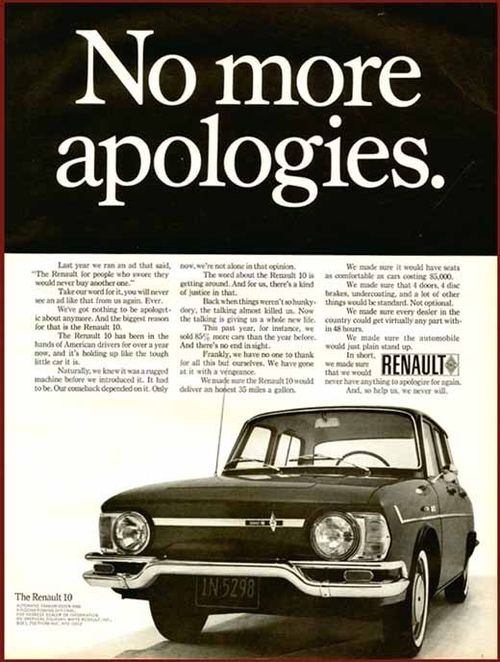 “We’ve got nothing to apologize about anymore,” the body copy read, because the Renault 10 “has been in the hands of American drivers for over a year now, and it’s holding up like the tough little car it is.”

In one year, Renault had gone from zero to cocky, claiming that in improving the quality of its product, “Frankly, we have no one to thank … but ourselves” and concluding, “we made sure that we would never have anything to apologize for again. And, so help us, we never will.”

So the next time your boss tells you that desperate times call for cautious communications, you can use the story of Renault to say, “Il n'a pas toujours été ainsi.”

(It was not always thus.)

Postscript: So the story about the advertising is true. But what about my mom’s contention about the Dauphine and the dog? While I couldn’t confirm that, Time magazine did name the car one of the 50 worst of all time, because as auto writer Dan Neil said, “it was the most ineffective bit of French engineering since the Maginot line.” The Dauphine could, he said, actually be heard rusting.