Wife switched to Jon Stewart; I have no argument. Do you? If not, good night.

I guess Paul's just having a Rand to Wolf talk. His hair looks like Cruz's, mussed up.

Here comes Rand Paul. I'll never make fun of Marco Rubio's performance last year, by the way. A month later, I was emceeing the Ragan Speechwriters Conference, I was introducing keynoter Jeff Shesol and had EXACTLY the same desperate drymouth. It was profound. There was a bottle of water on the lectern and I drank half the thing, knowing full well it was Shesol's and not mine. Someone surreptitiously took him a fresh bottle and gave me a dirty look.

I'm starting to think about other things.

And back to Anderson Cooper and Kathy Griffin.

Among the Americans who keep the state of our nation strong, a relative of mine who posts during the speech, "I just unclogged my sink drain all by myself. If you know me at all then you know how monumental this moment is."

Cathy McMorris Rodgers? Who is this person?

I always time my buzz perfectly for the SOTU, but not quite right for the GOP response. Which I undershtand there are shree of this shear. I schwear, Ossifferrrrrrrr.

Alex Castellanos, for how many weeks did you have that line about Obama's speeches and sex in your speed holster?

If an HBO executive sees this live blog, the new show's going to be called "Real Time with the Murrdog." (Depending on the offer.)

Wife sez I didn't miss a surprise, but she felt it was a good "pep talk," and Obama seemed "energized."

Human props. Fuck Ronald Reagan for starting this repulsive tradition, and fuck these plastic Washington creeps for continuing it.

"How many times do I have to tell you …" he seems to be telling us. And that's part of the problem with parents and presidents: having the same dad tell us the same shit for five, going on eight years in a row.

When Obama talks about Republicans, shows body language that, if you saw it on one of your employees, you'd assume it meant they were already looking for a new job.

My one-man focus group, my liberal wife, shrugs and says of the speech, "It's very liberal."

I'll know I've made it when I have people to build my screwdrivers. Back in a jiffy.

Have I missed the "surprises" were were promised?

Live blogging during a speech is bad form. Luckily, this isn't a speech. I know speeches. I love speeches. And SOTU, you are no speech.

My friend's answer to my question. Of her eight-year-old girl, she says: "Her friends are everyone. She is watching Obama's speech with me and is asking me hard questions, such as 'why isn't he being fair to everyone?' 'He is our President. Doesn't he protect us?'"

I've never identified with another president as much as I idenitfy with this one, and I never expect to identify with another one like this again. So I feel the man's pain. And what I'm wondering now is, "How can he bring himself to form his lips to mouth this list of platitudes?" Me, I can barely sit here and listen to it.

One Facebook friend is watching. She writes, "Trying to educate my daughter in a positive light as she has never known another president. Hard to do. She is 8. I want her to believe in America. She has no limited ideas on who is a friend." I've asked her what she meant by that. I'll let you know what she says.

An empty limosine pulled up and this introduction stepped out.

That's gotta be the earliest and dumbest applause ever.

President Obama learned his rope-line swagger at the gym. I do that same act after when I have that nice little workout buzz after hoops.

It's early, but so far I'm funnier than Bill Maher.

I appear to be the only one of my Facebook friends watching the SOTU. I'm jealous of them.

Kathleen Sebelius. That's the first time I've seen her since she was on the Jon Stewart show.

Blitz: "The moment is getting closer for the president to deliver his (breath) address."

Favreau, who I'm introducing at the upcoming Ragan Speechwritiers and Executive Communicators Conference as the onetime Jennifer Lawrence of speechwriting.

No, that's Newt Gingrich. I've got to get a TV.

Anderson Cooper should not do that New Year's Even thing with that cheap and shitty comic, because every time I see him and hear him laugh I think of that humiliating show. It reminds me of a stock broker my dad once had who liked to tell a story of his early years, selling shirts out of the back of a car. A charming story if told by a middle-aged Walter Cronkite. But this guy seemed like he should be selling shirts out of the back of a car. "He shouldn't tell that story," my dad said. And Anderson Cooper shouldn't … oh, never mind, Pat Buchanan is on now.

I've pointed (breath) this out before, but Wolf (breath) Blitzer, who I (breath) call (breath) "Blitz," breathes at the strang(breath)est intervals.

Jake Tapper: "But Dana, I'm sorry, you were talking about one of the stars of Duck Dynasty …"

Dear conservative friends: If you will agree not to assume that every liberal is a self-righteous pipsqueak gasbag like Chris Hayes … well, I already assume you're not like Sean Hannity. Let's switch it over to CNN, where we can agree on the boyish charm, warmth and sincerity of Anderson Cooper, and his guest, Newt Gingrich.

10-year-old daughter Scout is always idenitfying professional comics and asking, "Is he/she funnier than you, Dad?" I'm not answering that question, I always tell her. (There really are such things as dumb questions, I add.) Incidentally, that glib wiseguy Bill Maher is taking over the Huffington Post's Twitter feed to live tweet the SOTU tonight. Scout, get your ass to bed.

As the AP reports, President Clinton called the SOTU in 2000 "the strongest it has ever been."

Certainly stronger than in 1975, when President Ford said frankly, "I must say to you that the state of the union is not good." (And only two years after President Nixon had said it was "sound, and full of promise"!)

Calvin kept it cool in 1925 when he said, "the general condition is one of progress and prosperity," and LBJ in 1965 was all, "This, then, is the state of the union: Free and restless, growing and full of hope."

Maybe tonight's surprise comes when President Obama calls the State of the Union "off the hook. Woot!"

All the dozens of rote annual articles about the crafting of the SOTU aren't worth these two sentences, by former President Clinton speechwriter Jeff Shesol. "The State of the Union address is not really written by committee," he said in a New Yorker analysis of why the State of the Union is so sorry. "It is written by flash mob—a sudden aggregation, inside and around the speechwriting offices, of White House aides, Cabinet secretaries, pollsters, and college roommates of the President."

And Joe Biden listening for a whole hour without talking is always a surprise. So we're already there.

Preview from the cockpit. 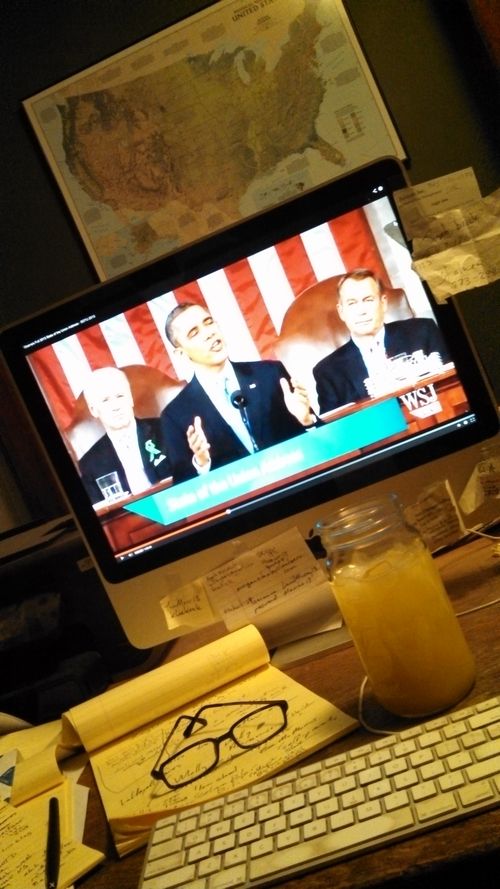 On my way out to the liquor store with mittens on my hands and Pete Seeger on my mind, it occurs to me that we ought to frame the State of the Union in terms of the bigger picture. It would be fun to ask Americans, "Is does this land seem more, this year than last—or does it seem less—made for you and me."

Tonight President Obama "has got to convey a sense of focus and forward momentum," former President Clinton speechwriter Jeff Shesol told The New York Times. "He's got a lot of time left in his presidency."

"At the end of the day, we're part of a long-running story," President Obama told New Yorker editor David Remnick recently. "We just try to get our paragraph right."

"He's bankrupt," says former Senator Joe Lieberman speechwriter Dan Gerstein, who in past years has led the speechwriting community in a lively conversation about the SOTU. But tomorrow night is Gerstein's poker night, and he's not going to miss it because he doesn't believe President Obama has any big ideas left.

So I guess you're stuck with me. As I'm sure you're wondering: What will Murray drink this year? Usually I lose myself in ebullient red wine. But though my wife doesn't like it when she sees me marching upstairs with a bottle of brown stuff, I've gotta say, this year feels like a bourbon year. In any case, meet me here around 8:00 EST.