I was in a pretty bad mood during the first day of Content Marketing World 2013 last week.

And Content Marketing World—with its 1,700 attendees, led by the eternally cheerful ringleader Joe Pulizzi, everyone buzzing and chirping about how content marketing is getting more and more sophisticated every day in every way as it simultaneously amplifies human dignity around the globe and increases lead gen at home—is a bad place to be in a bad mood. It’s why they don’t paint funeral homes orange.

But I learned something about from the experience, that I’d like to pass on to you.

I had a boiling head cold that had come on the night before like a Colorado flash flood. All day I sneezed like a bugle. And when I wasn’t snorting grossly, I was blowing my nose so that by the end of each session my notebook was surrounded by the little white Kleenex balls.

“God bless you,” the woman sitting next to me would say, meaning, “Dear God, why did you have to seat me next to Beelzebub?”

“Thanks,” I’d say, and mutter curses of my own.

A cold this bad feeds itself. So during breaks between sessions, I enhanced my personal brand by racing around refreshment stations in the vendor lobby like a honey badger, furtively glancing around to avoid anyone I knew, and eating everything I could get my shaking hands on: An orange donut. A tub of yogurt. A banana. Orange candies. A whole bagel, washed down by two cans of Orange Crush.

At one point someone I did know saw me eating a stack of orange peanut butter crackers, over a trashcan. And he took a picture. Thanks a lot, Russell Sparkman. (I can't get the picture to appear right side up; which is fitting, somehow.) 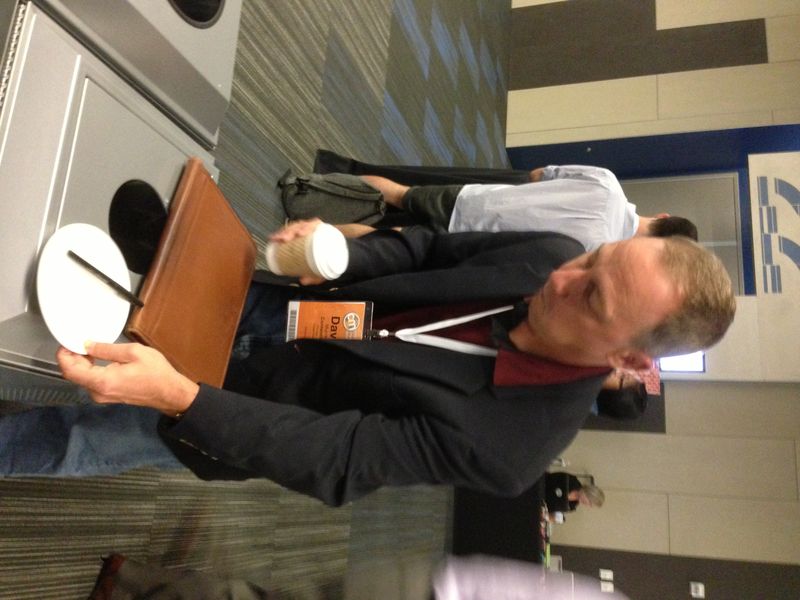 What was instructive was how all of these problems—the distraction of the urgent physical calamity that was taking place inside of me and my honest worry about whether I was going to make it until the end of the day without someone asking me to leave—affected the way I took in information about content marketing.

And it came to me like a 300 mile-an-hour sneeze. And I scrawled in my Kleenex-littered notebook.

The next time I present a content marketing strategy to a CEO or anyone else, I’m going to try to remember what it was like being me on the first day of Content Marketing World 2013, orange and optimism all around me but pain and anxiety inside, unreachable by anyone who couldn’t credibly promise to solve my real problems immediately.

Yes. I’m gonna gear my next pitch to a crazy nastyass honey badger.