Scout slept over at her Aunt Susy's Sunday night, and we had some people over. Hungover Monday morning, I couldn't sleep, so I went down and laid on the couch and flicked between CNN, which was talking about President Obama's Memorial Day visit to Arlington Cemetery, and The Golf Channel, where mediocre honkies were congratulating one another for broadcasting live from a golf tournament for injured vets.

One of the honkies told one of the other honkies, "For most of us, our patriotism just oozes out of our pores."

Was that what I was smelling?

Around the same time, Lt. Col. Mark Weber was rising out of a wheelchair to give a speech at Fort Snelling National Cemetery, in Minnesota. Though the memoir I helped him write, Tell My Sons, is being brought out by Random House next week, its author is gasping for survival. Cancer doesn't accommodate book tours.

But Weber is on the move anyway, as fast as he can go.

"You want to honor the fallen?" he said in his speech. "Then be a good citizen." 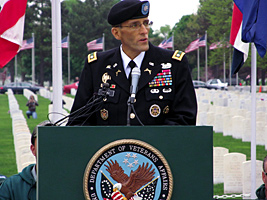 We call it communication.

And the benefit of honoring that on Memorial Day is that at least we know how woefully short we fall in achieving it.

Whatever Memorial Day is for, smugness isn't it.