I've never been to a high school or college reunion before. In the same way that even the worst people behave well when they're in a public park on a sunny Sunday afternoon, I imagine the best people pose and preen and lie at school reunions on a Saturday night.

So I was glad that the "college reunion" I went to last week consisted entirely of me and three guys who I "dormed" with my freshmen and sophomore years at Kent State University. We've kept in touch through the years, so we know perfectly well and how poorly each of us is doing. We got drunk at the Venice Cafe and told the old stories again. 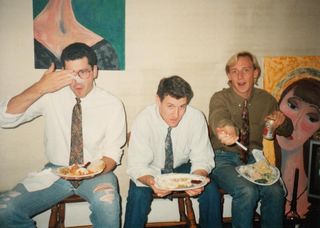 But on the blustery afternoon before, I took a walk around campus alone. I hadn't seen it since I graduated 23 years ago. It was pretty much the way I remembered it, so I didn't have a hard time finding my way around.

I stood next to the dormitory where (so I was later told), when my parents dropped me off for the first time, my dad turned to my mom and said with a tear in his eye, "There goes a perfectly good boy."

I noted the spot in the dorm's courtyard where I set the straw-stuffed footstool on fire, resulting in an arson charge and nearly expulsion.

I walked along the sidewalk where I had excitedly opened my first college English journal, only to see the shocking letter F. Over the semester, I had written many more thousands of heartfelt words than any of my classmates. But the teacher found many of the words obscene. The words, and the booger I had scotch-taped onto one of the pages because I thought it was "creative."

I walked past the bank in the Student Center, where they used to have a cartoon on the wall that said, "How can I be out of money? I still have checks left." A joke I didn't understand until my junior year.

I walked through Bowman Hall, past the office where Dr. Null told me I was probably the best writer at Kent State, which I thought was a big deal.

I walked across the open field where I sobbed in the pouring rain at night because, five days after I had first fallen in love, the girl broke up with me. (We're married now, because I finish what I start.)

I crossed the campus road where I had jaywalked on the Monday after Thanksgiving break in 1989. I almost got hit by a car that day, because my mother had suddenly died on Thanksgiving, and I assumed everybody in the world must know, and be looking out for me.

I walked along Summit Street, where I often rushed home from English class feeling that the meaning of life was on the tip of my tongue, and maybe this was the day that I would get it into a notebook.

The wind was blowing hard, so I couldn't be completely sure why tears kept coming out of my eyes.