That's all I can find about my "Uncle Gish," who was neither my actual uncle nor was named Gish. Actually, I don't know where the nickname came from. There's a lot I don't know about Uncle Gish. 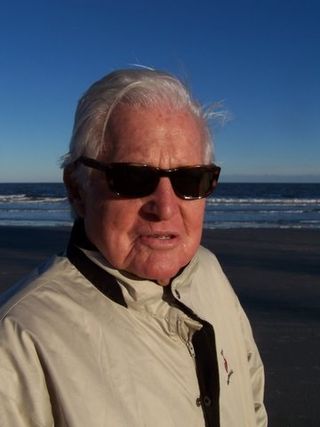 What I do know is that he was a corporate pilot for Armco Steel when the corporate plane was a DC-3.

And he was a golfer. And I mean a golfer.

The news of his death may mean the end of the plaid industry.

About ten years ago Gish and I started playing matches every year, at his country club, Brown's Run. We didn't call them matches, because Gish's ethic was more gracious than that. Two men didn't have to acknowledge they wanted to beat one another's brains in. It was understood.

Once I arrived an hour early to warm up before our noon tee time. The clubhouse manager informed me, "Mr. Pague has been here practicing his bunker shots since nine."

And he never lost the ability to shoot his age. The last time I played him, he was actually 10-under—at 92, he shot an 82, and beat me by six strokes. It would have been worse, but his putting was off.

"One of these years, Uncle Gish," I told him every time we shook hands on the 18th green.

And I don't mean the green plaid blazer and the yellow pants.