One of the finer points of communication seems to be lost on millions of bloggers.

A former corporate communicator for the local telephone company, Ponce has been hosting Chicago Tonight for long enough that he's become a kind of bland institution, like the iceberg lettuce or the Ford Focus. 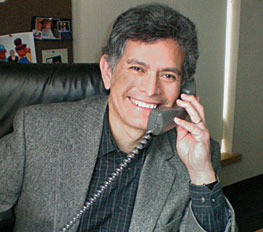 Some time ago—probably at the exact moment his superiors asked him—he started writing a blog, on WTTW's website.

He's a decent writer (even though he belies his boyish good looks by old-fartishly inserting two spaces after periods).

And his posts are always brief and generally to the point. He seems to enjoy writing them, and he posts often.

It's not what he writes that's the trouble. It's what he doesn't write.

• The fun of shopping at garden centers

• The beauty of the prickly pear cactus in bloom

• A technique for removing the Chicago city sticker from one's windshield

• The value of a long vacation

• The prevalence of tattoos on young people these days (thanks for noticing!)

• Why we should feel sorry for Rod Blagojevich ("His critics say he is narcissistic and self-delusional. But even a self-deluding narcissist isn’t immune to fear and anxiety.")

• The "segue music" between segments on Chicago Tonight

• The importance of getting the most out of summer weekends

It's possible that Phil doesn't consider himself a journalist. But his viewers do. Or at least they wished they honestly could, despite his milquetoast interviews. But then they see a blog like this, and they have to know for sure: This guy doesn't have a courageous bone in his pants.

This is who we want running our only substantive local TV news show? A mealy-mouthed poet, a smarmy seaside-vacationer, an amateur gardener, a mild-mannered summer weekender?

We'd forgive him all those obnoxious habits and we'd put up with his pansy-ass posts, if only once a week, once a month, once a year he dared to utter one disagreeable or interesting or candid insight he must certainly have picked up during the course of his nightly run-ins with Chicago politicians, business kingpins and other local players.

We take so much from what people refuse to say (and not all bad; how often do you hear someone complemented, "you'll never hear her say a bad word about anybody?").

What do you refuse to say? If the answer is anything controversial, anything useful or anything surprising, you can be assured that your audience is on the way out the door, if they haven't left already.