I went to Kent State, and had a sociology professor named Tom Lough (pronounced "luff"), who was a member of the Kent 25, people indicted for inciting students to "riot" on the Kent campus, May 4, 1970. 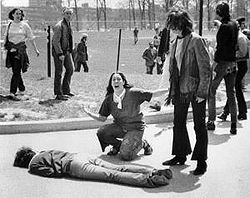 He was acquitted, but he always argued hard that President Nixon had something to do with the shootings. Everything to do with them, he suggested. I was never convinced he was right, but he woke me up to some important possibilities.

He died a couple of years ago, and I didn't mark his passing. Today, on the 40th anniversary of the Kent State shootings, is a better time to do it. Lough wrote a letter to his students after the school closed down in the wake of the shootings:

It is tragic that only after our tragedy do the nation's campuses rise to confront the issues students have long tried to peacefully present. But now many are realizing the obvious connections between the national guard on the campuses and the national guard in the ghettos, the rule of military violence at Kent and the rule of military violence overseas. Kent's sorry has become the nation's outrage, and you were there. Don't forget it.

I don't forget you either, Dr. Lough.