In hungry anticipation of a family trek to Army & Lou's soul food and southern cooking restaurant on the South Side Saturday morning—we were going down there to visit Jesse Owens' grave for Scout's cockamamie Black History Month project—I checked the restaurant's website. 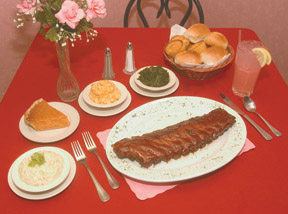 There I found a suitably terrible photograph of the food, along with a series of citizen restaurant reviews.

Most were positive, as you'd expect.

But one reviewer, "Heidi," wrote:

Go when you aren't in a hurry; the service was excruciatingly slooow. I had to ask for silverware, even though bussers were swarming all around. I think it depends on the server; the table near me looked like they were getting excellent service. Ask for corn muffins if they aren't put on the table; they are outstanding.

That didn't discourage me either, as I've been to the place and know that the excruciatingly slow service is an important part of the experience, whether you're south of the Mason-Dixon Line, or just south of Lake Street.

Still, to put a review like that on one's own website is either laughably journalistic or—and I favor this possibility—a clever way to discourage Yuppies-in-a-Hurry from coming to Army & Lou's and screwing everything up.

We usually think of "transparency" as a way to convince our friendly constituents that they can trust us. Smart institutions like Army & Lou's (and Murray's Freelance Writing) also use it to discourage the sorts of people we don't want to do business with.