The third in my serial account of the meaning I found on my motorcycle over 4,600 miles from here to Nova Scotia and back. —DM

Six or eight hours a day, all on bouncy back roads, on a motorcycle not at all designed for long-distance cruising. That was the plan.

“You know, it might be brutal,” a friend told me before I left.

I agreed. But then, brutality was one of the
goals of the trip, and agony and boredom seemed prices worth paying for the
sights we were going to see.

Much to our surprise though, after a day or two of getting
our haunches used to it—we slouched in different positions and periodically stood on the foot pegs to alleviate the
literal pain in the ass—we found that our chests got used to being pushed around
by the wind and our heads got used to screaming through it. So used to it, that
it was the stopping that became uncomfortable.

Montreal surely deserves more than lunch and a visit to the
local Triumph dealer. And the ancient, walled Quebec City definitely rates a
stay-over. But within an hour or two of taking in the physical wonders of those
cities, we found ourselves itching to fight our way out of the sprawl and get
back on the road.

I’ll explain this rejection of an easy chance for cultural
exploration by quoting a line scrawled in my journal during one of these brief
stops: “If somebody gave you the chance to leap up into the air and fly every
day for three weeks, you’d probably fly around the world. Paris, Rome, Beijing,
Hong Kong, Buenos Aires. But when you landed in these places, would you really want
to spend a lot of time tramping around looking at architecture and
people-watching and window-shopping? No, you’d have a quick gander, and jump up
in the air again—and fly!”

My dad would have understood that. He might have feared motorcycles, but he knew about flying. His father crushed his youthful fantasy
of signing up for the Royal Air Force in the early days of World War II; the
idea, pitched at the family table with all the reason and enthusiasm a
17-year-old could muster, was dismissed with four words from his father: “Eat
your dinner, Bud.”

But aviation had him, and after the war, upon his return from
an unglamorous army assignment, he learned to fly.

It was that flyer—and boater and car nut and writer of essays
with titles like, “Engines In the Morning”—who I talked to almost constantly, in the
privacy of the wind and the motor.

“Come on, Dad, admit it,” I’d say, cruising up the bigwide
St. Lawrence River. “This is pretty cool.”

Going down a country road on the north coast of Nova Scotia, Tommy tells it like it is.

In fact, it was my willingness
to take a chance that I think made Dad, easing as gracefully as he could into
his seventies and then his eighties, a little jealous. Driving my decrepit
Scout through country fields and urban ghettos and breaking down and allowing
myself to be cradled for shelter, food and repair by whatever locals came upon
my sorry ass: God, you’ve got a lot
of nerve, he said upon hearing stories like that. But I had no more nerve
than it must have taken him to willfully trap himself aloft and alone in a Piper
Tri-Pacer for the first time with nothing but an empty seat as a co-pilot.

The trouble Dad and I had about adventuring was mostly that, I was
doing it and he was done doing it. And in one of the large conversations we had
toward the end, he as much as admitted it.

“That bad, bad Tom,” he would say, joking but mostly not
joking. And as we headed northeast, he found ways to keep on saying it.

For good karma, Tom and I both wore windup watches that we’d recovered from
my dad’s dresser drawer after he died. My Movado Kingmatic worked throughout
the trip, but Tom’s Timex stopped cold on the first day. There was also the record-setting
low-pressure system that dad arranged to hover over the northeast to rain on us
at least once on every one of the 12 days we rode until geography forced us to
turn back west from the coast of Nova Scotia.

But if Dad was so acutely aware of our schedule and progress, how
did he not know that Tom had rescued me from the grief-duty of tearing down the old model train layout by driving 10 hours round trip to pick it up and
take it home to give to his son someday?

Surely he knew that Tom had been the friend who finally goaded
me into feeling and expressing my deepest feelings about my dad—who caused me
to understand awkwardly and noisily that it was not his stories or ideas but his
smell and his sound and his hook nose that I was going to miss.

And you’d think someone
would have Western Union-ed him that Dad's flight logs I’d given Tom to
study, had been organized by Tom’s sister into a museum-quality shadowbox tribute—each book opened to just the right page, Dad’s pilot’s license, the lock
of baby’s hair that went with all of it—and given to me the day before we left
on the motorcycle trip. 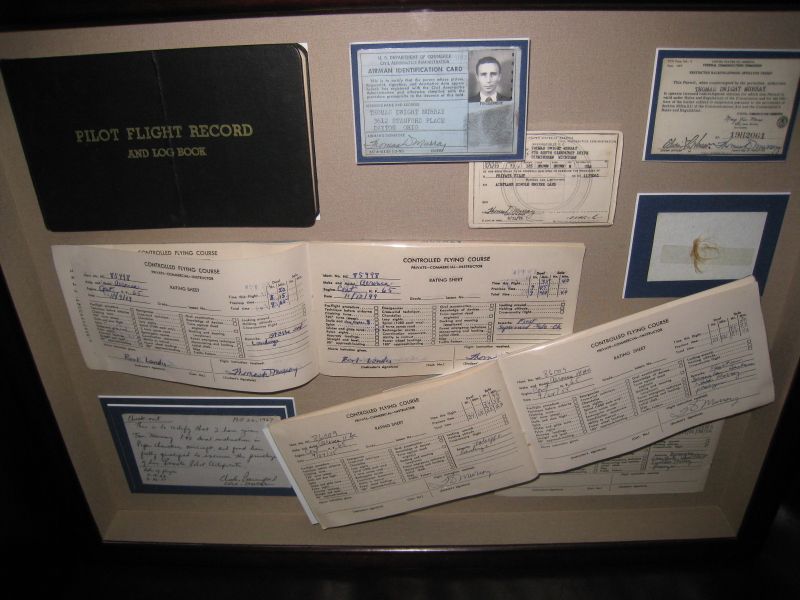 I guess it didn’t rain the whole time we rode down through New Brunswick to Moncton, east
through Nova Scotia to Hawskbury, northeast to the head of the Cabot Trail on
Cape Breton.

So maybe I should take that as a sign of Dad’s grudging
acquiescence. In fact, I think I’m going
to take it that way, from here on out. From now on when I talk to Dad from the seat of a motorcycle or anywhere else, it won’t be with
a bashful smile, but with a winking grin.