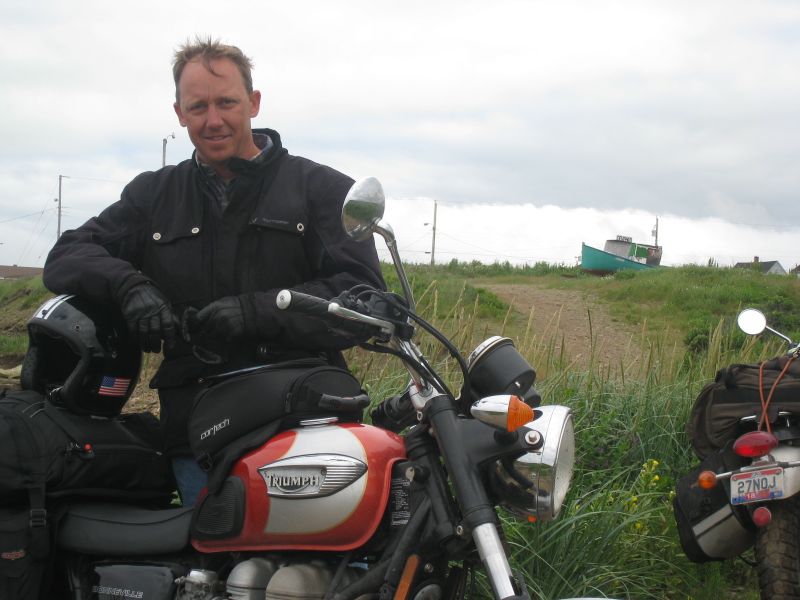 This begins a serial account of the three-week motorcycle trip I took in June and July. I hope the icon showing me looking sort of cool will visually separate this series from my usual posts, which usually portray me as anything but. I'm publishing these posts here—with a few photos and videos—for the enjoyment of any who are interested, but I realize they're off topic and don't expect them to be read by most of my Writing Boots audience. —DM

At 5:00 a.m. on Saturday,
June 27, I opened the gas valve, set the choke, turned the key and pushed the
starter button.

The Triumph hummed, louder and louder as it warmed up. I was more reluctant.

The night before, the world had begun
organizing itself to convince me I was making a mistake with this trip.

Knowing I was leaving before
she would wake up, the five-year-old Scout reached for me from her bed and, over and over, screamed “Daddy!” until I
simply had to walk away. Cristie and I sat on the couch gaping at idiots
talking to Larry King about Michael Jackson, who had died a couple days
earlier. I imagined but didn’t say that this is what people must do the night
before they report to prison.

I kissed her in the morning
in the dim bedroom light, pushing my lips into her cheek deeply. The comfort felt crazy to leave.

On the Kennedy Expressway riding south
through the city, the cool blue predawn light made everything look greenblue
and shiny as if it had been scrubbed overnight just to convince me I was on the
Yellow Brick Road, headed in the wrong direction.

And as I crossed the Skyway
bridge, the sun sat perfectly on the surface of Lake Michigan, bobbing like a
lost toy ball.

I knew I had more to lose
than to gain by attempting to ride a motorcycle thousands of miles on country
roads from here to Nova Scotia in hopes that in none of the infinite moments between now and my theoretical return
would a deer jump out of the woods, a board fall off a truck in front of me, a tire burst, a rookie mistake send me into the back of a car.

Three days before my
departure, at a family dinner out, my wife said quietly while Scout was in the
bathroom, “Please come back.”

The words sounded so sweet,
coming from my college sweetheart and my wife of 15 years, that it almost felt
that the trip was over, and I was already being welcomed home.

In the months and especially
the last couple of weeks before I left, a subtle finality came across all of
us: No, this probably isn’t the last
time we’ll see each other. But, maybe it is.

Unlike some adventurers perhaps, I
could neither ignore nor blithely accept that chance. This trip—my owning a
motorcycle in the first place—was in defiance of my father. “I’m still
fascinated by Harleys new and old,” my dad confessed at the end of a magazine
essay he wrote when I was a kid. “I guess I’d never own one because it would be
a terrible example for a son I don’t ever want to go near a motorcycle of any
kind. He’s got a good head on his shoulders, and I’d like to keep it there.”

That
my dad died six months before made my rebellion a betrayal. (Dad would soon take
his revenge.)

In any case, in the last two
weeks I had taken Scout to her first Cubs game, she and I had slept out on the
back porch one night, we had played together in a Father’s Day baseball game. I drank her in as I morbidly
wondered, and in some cases believed I actually knew, what she would remember
of these last days with her father.

Terribly melodramatic I
know, but that’s how it felt, and it mixed happily with spring-out-of-bed-at-first-light
excitement that I was feeling for the first time in a long time. And also new:
the eerie absence of that grinding, floating, someone’s-gonna-get-me, something’s-terribly-wrong
anxiety that’s been at me for the last few years now as the shrinking publishing
industry and then the global economy have made me fear constantly for my
livelihood.

I also decided that, if I was
going to be selfish enough to risk Scout’s life along with my own—I’d bought
life insurance, but State Farm doesn’t provide a new father—my part of the bargain would be to write her an honest account
of the trip and a candid self-portrait of her dad, at 40 and still searching. Maybe
she can read it when she is 40, in lieu of going to the time and expense and risk of
taking a three-week motorcycle trip away from her own family.

By the time I got off the
highway and jumped on Route 6 south of Michigan City, Indiana, what I
was leaving faded into the morning fog and I started to make myself at home, in
the journey. 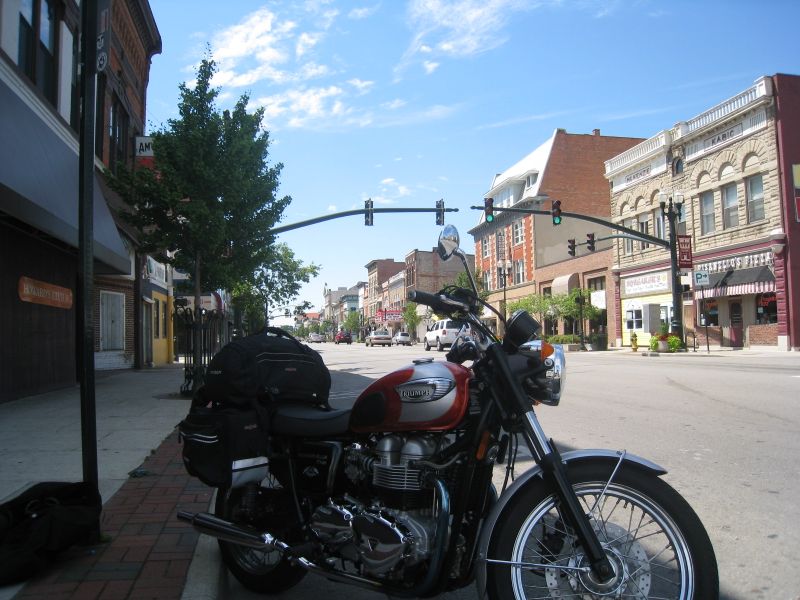 The bike was still shiny as I stopped for a hamburger in Bowling Green, Ohio, bound for Cleveland.