Now look: I'm not actually saying that Obama's communication director Robert Gibbs should have hired me instead of Jon Favreau.
Writing soaring rhetoric takes a certain type of talent, a talent similar to what it takes to bullshit one's way through a sociology term paper. Grownups can be moved by listening to such rhetoric, but I think we have a hard time keeping a straight face while writing "yes we can" two dozen times in a single speech script.
So Favreau was probably the right man for the campaign. And in gratitude and admiration, Obama named him director of White House speechwriting. But governing is different from campaigning, and now the premium is on prose more than poetry, maturity more than enthusiasm, wisdom more than spunk.
And of all the hundreds of speechwriters I know, I'm not sure Favreau is the right guy (actually, he's the guy on the left). 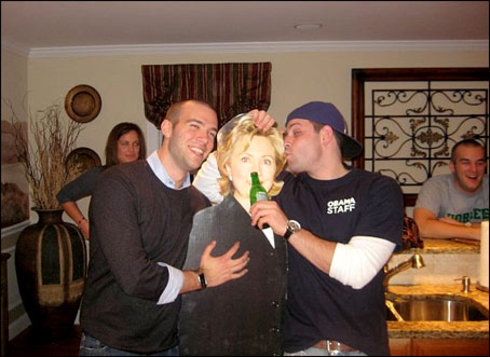 Mr. Gibbs, if you agree that the lad needs some supervision, I'm reachable here at Writing Boots; I can give you lots of recommendations.