This morning we launched the 2020 World Conference of the Professional Speechwriters Association. The event will be virtual this year, and the amount of invention required to convert a time-honored and beloved physical gathering to an equally useful and convivial digital affair has reminded me often of the first PSA World Conference, held at New York University back in 2014.

Logistical circumstances that I don't quite recall dictated that we announce the conference only about three months before holding it. That's not nearly enough when you're launching a brand new event. For instance, when we created an Asia-Pacific Speechwriters Conference a couple of years ago, we announced it well over a year in advance of the day, so that by the time the show rolled around, it seemed to folks an institution already. And when you're launching the first conference of a new global association, you don't want to make it appear as if the idea popped into your head yesterday afternoon.

Beyond the loyal cadre who made up most of the speakers for the event, I had to convince speechwriters quickly and completely that this event was important enough for them to subsidize and attend on short notice. I caught a huge break when I casually mentioned the event to David Petraeus, with whom I was corresponding back then because he was the mentor of the author of a book I was helping to write. Petraeus felt grateful to me for helping his protégé, a young army officer dying of cancer. When he ascertained that the conference was going to be in New York, where he was working at the time, he asked me if I'd be interested in having him make an appearance. (At left is former military speechwriter and early PSA booster Randy Lee.) 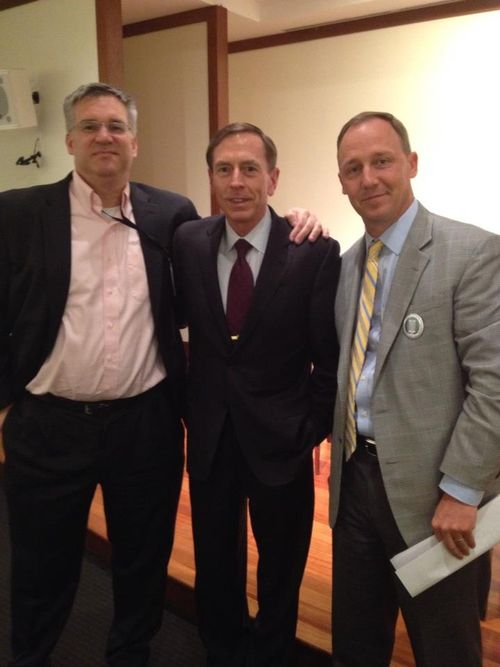 With Petraeus on the program, people had to realize I wasn't screwing around. But of course that's exactly what I was doing: On the eve of my departure for New York, my art teacher wife and our 10-year-old daughter were feverishly stamping out PSA buttons at the kitchen table, using a machine borrowed from the school.

On location, my administrative support from the publisher that then owned the PSA consisted of a very nice young man whose sense of urgency, shall we say, did not match mine. For instance, he asked if it would be cool to cut out of the event a little early because he had an appointment with a really baller New York tattoo artist. Permission granted. But on the morning of the first day of the first conference in the unwritten history of the Professional Speechwriters Association, my man was not in the hotel lobby. After making futile calls to his room, I walked off toward Washington Square alone.

Somehow, it all worked out. My apologetic associate caught up with me on the sidewalk. The sixty participants appreciated most of the program, which was a bit uneven but which contained enough memorable sessions—including my conversation with Petraeus, in which he talked about his experience of once having served as a speechwriter, as a young officer—that most of the people who were there wanted to come back next year. (In one session, a Danish classical trumpeter and rhetoric scholar named Mette Højen reduced the entire delegation to tears by verbally connecting their personal sadnesses with her heartbreaking rendition of Danny Boy.)

The most indelible moment for me was at a caucus at the very end, where people got up and spoke about what the new organization meant to them. Hal Gordon, a former Reagan White House speechwriter who I first met in 1992 when I was 23 years old and a staffer at another speechwriting conference, stood up to talk. Do you know what the PSA means to me? he said. It means THIS! And with that, he triumphantly thrust aloft the PSA button that that my wife and daughter had made at our kitchen table just three nights before. Gordon went on to talk about how for decades he had found himself at civic events and cocktail parties, always having to explain what he did for a living and feeling he needed to convince people that speechwriting was a legitimate professional practice and not just some fringe racket. Now, he suggested, he could tell people he was a speechwriter, and proudly point to his button, like a badge. 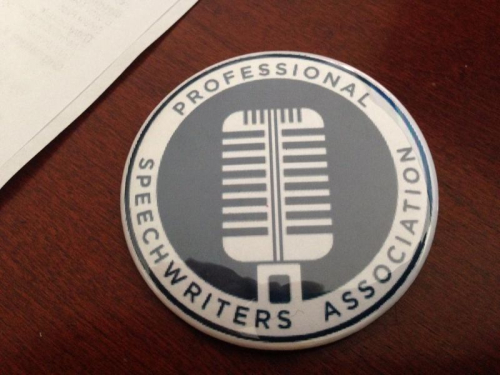 My associate off to his tattoo appointment, I was left at the end of the conference boxing up leftover materials with a young NYU communications staffer. I turned to her and cried with relief.

Now it's 2020, and we stand at the beginning of something else.

But this time, I do not walk alone: With the help of an impeccable support team—and on behalf of hundreds of speechwriters who we have happily come to take one another and us for granted as permanent colleagues and friends—I've pulled together a World Conference that's as necessarily inventive as the very first one. And that I have every reason to believe will be just as meaningful and memorable, too.

U.S. Senate Chaplain Barry Black and San Francisco Federal Reserve Bank CEO Mary C. Daly join several former White House speechwriters, the speechwriter to the president of the European Commission and speechwriters to some of the world’s most influential corporate, political, university and nonprofit leaders for a crucial conversation about the state, the future and the soul of the speechwriting business. And the conference will not end until Mette Højen, along with her husband Jonas Wiik, who is the principal trumpet at the Royal Danish Orchestra, plays us out by connecting for us the deepest magic of rhetoric and music, once again. 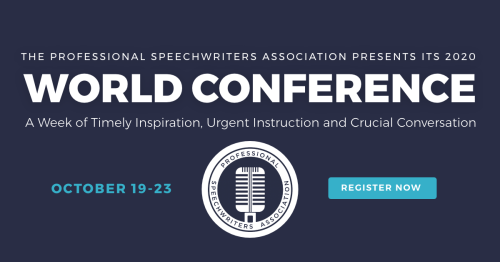