Here's how it's felt to me more or less since the beginning of coronavirus and even more since George Floyd. Conservatives in my life (and on my Facebook feed) have split into two camps:

• BLM trolls, posting on Facebook exclusively and steadily about defaced statues, rumors of poisoned cops at Shake Shacks, stupid liberals saying stupid things, George Floyd being mostly a CNN invention and rumors that the old guy hammered to the sidewalk in Buffalo was actually some kind of riot-inciter. These people amuse me about as much as Trump Trolls on my side who pass on every orange hair meme that comes their way. B-o-r-i-n-g. I don't unfriend them, because they provide me with blog material.

• The suddenly and utterly silent. These are my fellow citizens with whom I am having imaginary conversations every day all day. Imaginary, because during one of the most profound periods in U.S. history, people who used to talk national affairs frequently or occasionally are suddenly talking about the weather. Not saying I miss their perspective, exactly. Who needs more intellectual and emotional complication at this moment? But it's eerie not to hear from them at all. And the hush seems sinister, somehow. So I have imaginary conversations with them.

The imaginary conversations mostly involve me asking them why they've been silent. Has the cat got their tongue? I suspect they think their arguments will get them ostracized socially or killed professionally. I also suspect they're finding places to talk to other conservatives about how jackbooted America's liberal mainstream has become. In my head I yell at them, "What is it that you really think about George Floyd and Black Lives Matter? Tell us, and let's talk it over! This is still America, and we can still disagree—yes, even on matters of race! Is what you really think so unpalatable to me that you fear for the result of your uttering it?"

(But then, I worry I might be wrong about that—all of that. Also, why am I yelling?!)

I had an actual conversation with a friend recently about these issues; he comes from a more conservative place on most issues, including Black Lives Matter. I actually heard and saw him trying to come toward my place, trying to find a compromise position. He looked sort of surprised and disappointed at my own quiet disinterest in engaging him, at my own seeming weariness and lack of ideas. I was so opinionated on this stuff when we were young men and argued all night long! In his eyes, I seemed so defeated now. (Humbled, is how it feels to me.)

Speaking of which, my old friend Steve Crescenzo—a longtime real and imaginary conversational rival of mine—wrote last week about a conversation with his wife Cindy:

A conversation from last night, as Crescenzo Communications sat around the fire pit doing now-legal things:

Steve: "You know who I am really fucking sick of?"

Cindy: "The people in your head?"

Cindy: "The people in your head. You know, the people I always see you arguing with in your head. I can tell when you're arguing, because you make weird faces, like you are talking but you're not."

Steve: "Get the fuck out of here."

Cindy: "The hands are the giveaway. You also motion with your hands, like you are trying to convince someone of something."

Steve: "You're nuts. NO, who I am SICK of are all the stupid people who disagree with me on things that are so fucking obvious."

Cindy: "Yeah. The people in your head. You should try to make peace with them." 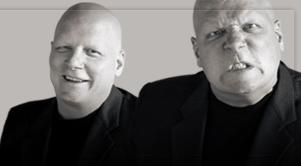