On Friday the Professional Speechwriters Association and the Executive Communication Council held our first full-on virtual conference. In my keynote remarks, I suggested that this isn't the most crucial time in the history of leadership communication.

Rather, it's the first. 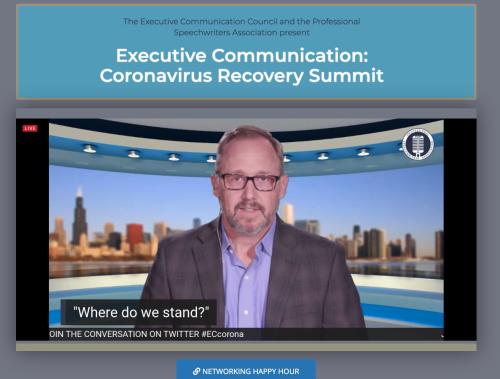 Exec comms, I continued, has for most organizations for all these years been a form of window dressing. Leaders were invited to high-profile events in order to say the expected things on the usual subjects: global trade, sustainability, technology. And say the expected things, they did. And if they said those things with a little extra verve, that was called "thought leadership."

There was absolutely nothing wrong with that, in those times: Social stability through pleasing-yet-predictable language is one rarely celebrated function of rhetoric. And creating speeches like that—especially when the speeches helped the leader of an institution communicate some humanity—was an honorable pursuit.

That's over now—and for the foreseeable future.

The change began not with George Floyd or with coronavirus. It began with the Trump election and the national realization that Americans do not share a president in common. "Not my president," so many Americans declared before Trump even took the oath of office. Suddenly corporate CEOs (and university presidents) were being asked to weigh in on subjects—LGBT rights, immigration—that had never been on their radar before. At the Founders Meeting of the Executive Communication Roundtable in February, folks noted that employees had begged their CEOs to say something about the death of Kobe Bryant.

People will take their leadership where they can find it, and if the president of the nation doesn't have broad enough credibility and accountability to all Americans, then people turn to the president of the university they attend, or the CEO of the company they work for.

And then coronavirus instantly made the society emotionally and intellectually dependent on CEOs—now, not just for rhetorical comfort, but for broader economic expertise and even health guidance.

And then George Floyd made CEOs moral arbiters, and their statements nothing short of a test of how sincerely society really believed Black Lives Matter.

Remember Ferguson, six years ago? Did anyone care what the CEO of Verizon thought about that, or what he was going to do about it?

As I said Friday morning, your job is completely different now. Many of the skills you've built over the years in order to diplomatically create interesting but polite executive communications—you master the speaker's "voice," you never make the same suggestion twice, you don't push too hard and you certainly don't insert your ideas into corporate speeches—these skills will hurt you more than help you right now.

I know some exec comms pros who are doing that, and I and the Professional Speechwriters Association and the Executive Communication Council aim to help.

Back here tomorrow for some ideas for how we might begin.