Editor's note—I had this little humor piece cued up on Saturday, March 28, but I decided not to run it because I honestly thought the very suggestion of home invasion might disturb people. Three weeks later, home invasion is still disturbing, and the president of the United States encourages people to "LIBERATE MICHIGAN!" and "LIBERATE MINNESOTA!" and "LIBERATE VIRGINIA, and save your great second amendment. It is under siege!"

Steve Crescenzo, take it away … —DM

My old friend Steve Crescenzo writes hyperbolically and often hilariously—usually about his life on the road with Cindy, his beloved wife, business partner, caretaker and boss. 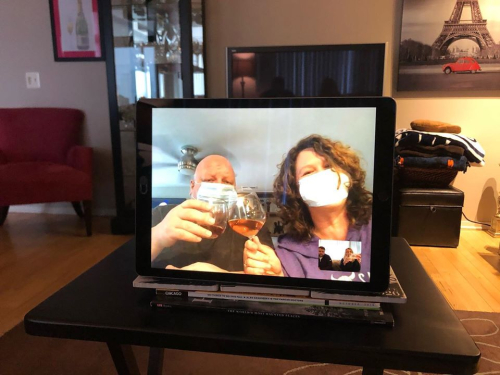 Here was Steve's Facebook post yesterday, typically unmoored from any facts—(no, Chicago hasn't issued all these gun permits; in fact, the gun people are complaining that there's a big backlog of background checks and nobody can get guns in Illinois)—but also typically in touch with everyone's worst fears.

This is posted with Steve's permission.

So . . . something like 23,000 gun permits were issued in the Chicagoland area in the past week or so. Sadly, none of them was to me. Because Cindy won't let me have a gun. That's right, she won't LET me.

And we will pay the price for my lack of a spine. When the looters and the hoarders and human scum (read: Trump supporters) are storming the gates of our compound, looking to take our food and toilet paper and grab our women by the pussy, they will have guns.

I will not. I will be forced to defend my family and friends and neighbors with my knives, Chinese throwing stars, clubs, swords and brute strength. Of course, I will also have pots of boiling oil on all the balconies, and Viet Cong-style trip wires and booby traps set up around the perimeter. Those are already set up.

But eventually, the "Trumpians at the Gate" will break through my outer defenses, and it will fall to hand-to-hand, room-to-room fighting. With their guns against my caveman weapons.

And we will lose. I will probably take out 30 or 40 of the cowards before I fall, but eventually I will succumb. And my last act will be to stab Cindy with my neck knife, so she doesn't have to live through the horrors of what the Trumpians would do to her if they capture her alive.

I will do it as an act of mercy, but also out of anger. Because I should have had a gun.