Perhaps some sense of normalcy has returned, as I'm offering a the first Friday Happy Hour Video here since late February. And this one is a doozy. Hat tip to speechwriter Desson Thomson, who knows where to find all the exquisite stuff. Click here to play this video. 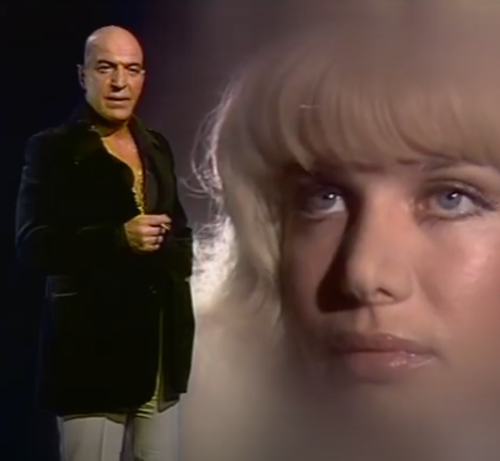 Hey, remember "The Most Interesting Dad in the World," who I wrote about here last week?—my onetime soccer sideline mate, who escaped Chicago during coronavirus and has been spent the last month with his two daughters "on a ridiculously happy-looking, never-ending sailboat trip all over the motherfucking Caribbean Islands," as I put it?

And Facebooked about it, incessantly. Between face-masked, glasses fogged errands, near-daily tears with my grief-stricken daughter, worries about work and bad nights of sleep, I see this jagoff and his high school daughters smiling on the open ocean, wading on the beach, standing at a restaurant with glasses of red wine in their hands, gazing off into the happy middle distance.

Then, his boat was stolen.

And after two days of searching the islands around St. Thomas—partly by hiring a small airplane—he has apparently found it.

And I'm glad—that it was stolen, and that he got it back.

But his other Facebook friends' reaction isn't nearly as mixed.

"Awesome! What shape is she in?"

"Say a prayer of thanks to St. Anthony."

St. Anthony is the patron saint of lost things.

Can banal be fatal? 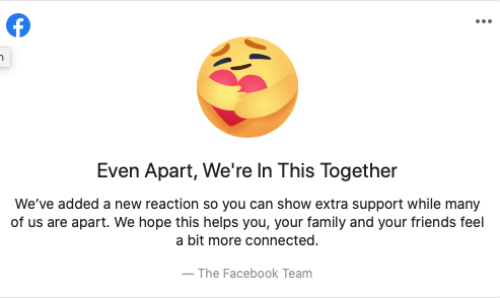 A buddy had a rehearsal dinner before his wedding where we all told stories about him and his bride. His uncle came up to him after and said, "Son, I hope you enjoyed that, cuz the next time they say such nice things as that about you will be at your funeral."

But that was before Facebook, when every year a bunch of people tell you they are more glad than not that you were born.

Which is the same thing they say at your funeral.

And this year, I really needed one.

I love you too.

P.S. For others with birthdays coming up during coronafuck, I will warn you that when you go to blow out the candles, you'll find it's suddenly hard to narrow the wishes down to one. Consumed with anxiety this afternoon—anxiety like the rain that's kept me from exercising today, unending, uncontrollable and not caused by any one thing but rather by everything—it's either write, or drink.

And I've always followed the maxim that it's not okay to drink while you're writing—though it is all right to write while you're drinking.

So that settles that, for the moment—but I know what I want to write about.

Writer, poet and frequent Writing Boots correspondent Peter Dean, who splits his time between Thailand and France, wrote a Facebook post this week called "Corona Corner: The Demon Alcohol." (Here's Peter, on his birthday, March 7. Handsomest old guy you ever saw; or oldest handsome guy, I'm not sure which.) 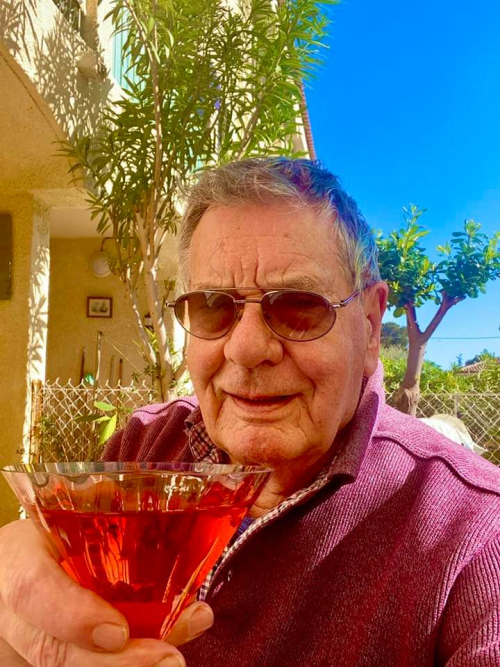 Today is not a good day. Wind and rain mean one is stuck inside. I reflect on the problems of mood change and alcohol. I read recently a piece in which the writer expressed surprise that a colleague started drinking at 11 in the morning. My dear, at 11 here in the south of France we habitually take a pastis or a vin rosé. But there is no doubt that being confined has increased alcohol consumption.

In Thailand, where a fair approximation of whiskey is available cheaply 24 hours of the day, consumption has been banned. Together with obligatory use of masks, it has kept the infection rate down.

Here in France one cannot go to the neighbourhood cafe for an aperitif and chat to friends. But plastic bags full of cheap wine are on sale. So one drinks. And then, people go out and forget about confinement rules.

I have experienced this personally. An event out of the ordinary—whether good or bad—changes my mood. Alcohol enables me to calm down. That’s the way it is, baby blue.

(I'm reading about Churchill lately as you know. When his wife Clementine once criticized his drinking, he said, "Always member, Clemmie, that I have taken more out of alcohol than alcohol has taken out of me.")

Well, Peter Dean said it well and Winnie said it prior—but Old Mr. Flood said it once and for all. One of the fictional composite characters in Joseph Mitchell's Up in the Old Hotel—, Hugh G. Flood was a retired contractor who had lived his life down at the Fulton Fish Market. Pouring himself a whiskey and water one afternoon, Flood gives the best summary I've read:

I love it and I depend on it, but I don't approve of it. When I think of all the trouble it's caused me, I feel like I ought to pick some distillery at random and sue it for sixty-five million dollars. Still and all, there've been times if it hadn't been for whiskey, I don't know what would've become of me. It was either get drunk or throw the rope over the rafter. I've thought a lot about this matter over the years and I've come to the conclusion there's two ways of looking at whiskey—it gives and it takes away, it lifts you up and it knocks you down, it hurts and it heals, it kills and it resurrects—but whichever way you look at it, I'm glad I'm not the man who invented it. That's one thing I wouldn't want on my soul.

I'm not the man who invented it, either.

But I do believe I'll have a little, right now.

"I think my favorite part of the day," writes funny Facebook friend Elizabeth Scionti Adamec, "is screaming the same answers to my children over and over from the bathroom."

Fact: My hair sort of flips out in the back right now. Opinion: It's actually kind of cute.

I was asleep at 9:00 p.m. but was awakened a couple of hours later, and there'll be no sleep for awhile.

As I have asked myself so many times in these last two months: What would Winston Churchill do?

He would not lie there praying for sleep to come. He would pour himself a strong drink and read Erik Larson's new book about his own finest hour—The Splendid and the Vile. I've been reading this book this way for a month now—slowly, in the eye of the coronavirus, with the eye of a communicator, looking for insights like a bulldog for a bone.

Here's the first: While a leader is normally a "dealer in hope," as Napoleon famously said—in a crisis, a leader can't deliver hope before showing a total understanding and acceptance and even graphic articulation of the gravity of the situation.

Which means first, of course, having that understanding. The day he became prime minister of England in May, 1940, he was moved to tears by a gaggle of Londoners gathered to greet him as he entered 10 Downing Street through a side door. "Good luck, Winnie," they said. "God bless you."

Once inside, Churchill began to weep. "Poor people, poor people," he said. "They trust me, and I can give them nothing but disaster for quite a long time."

Soon after, Churchill gave a radio speech in which he predicted "the battle for our Islands, for all that Britain is and all that Britain means." A "supreme emergency," Churchill described it. Half of Londoners told pollsters they were terrified by the speech. The other half said the speech made them "more determined," and "stiffened." (A cold communication calculation: Is it worth scaring the easily stricken in order to embolden the heroes you will need?)

Churchill was just as rhetorically bracing with his own ministers, telling 25 of them after he finally abandoned the notion of a peace agreement with Germany after the fall of France, "I am convinced that every man of you would rise up and tear me down from my place if I were for one moment to contemplate parley or surrender. If this long island story of ours is to end at last, let it end only when each of us lies choking in his own blood upon the ground."

Just as I told the executive staff of Pro Rhetoric, LLC on our last staff Zoom call! And just like Churchill's ministers before them, they shouted their approval and huzzahs. "He was quite magnificent," said our chief operating officer afterward. "The man, and the only man we have, for this hour."

In all Churchillian seriousness:

Just on the off chance that you're having a sleepless night of your own, the only way to listen to Churchill's famous "finest hour" speech is to listen to the whole bloody 30-minute thing, which treats every listener like a cabinet minister, shows total mastery of the situation on land, at sea, in air—while acknowledging uncertainty in the most certain terms.

All of which gives great shocking might to the unbelievably dark concluding sentiment, "But if we fail, then the whole world, including the United States, including all that we have known and cared for, will sink into the abyss of a new dark age made more sinister, and perhaps more protracted, by the lights of perverted science. Let us therefore brace ourselves to our duties, and so bear ourselves, that if the British Empire and its Commonwealth last for a thousand years, men will still say, 'This was their finest hour.'"

Don't bother lamenting the laughable shortcomings of our national leadership by comparison. Adapt, in your own sphere of influence, in a style that fits the moment, these eternal leadership principles.

A rich Republican friend on Facebook posts a selfie of himself and his wife golfing at a swell resort with the line, "Another day enjoying 'the pandemic.'" It is indeed an effort to understand.

My dad's birthday is Friday; he'd be 97, and heartbroken.

Two Independence Days ago, I wrote a Medium.com piece about Dad and what I referred to as "the national calamity" of the Trump presidency.

My father’s been gone almost 10 years.

On the Fourth of July, I cannot decide whether I want to wake him up to tell him all about the national calamity, or let him sleep, and spare him the pain.

I think I’m going to wake him up.

My spirituality is like a lot of people’s, I think: The closest touch we have with God is the memory of our beloved dead, after we have washed them and groomed them and dressed them and arranged their quiet hands. And the closest thing to prayer is the conversations we have with them, still.

Now that a new calamity has told the old calamity to hold its beer, I feel like praying again. 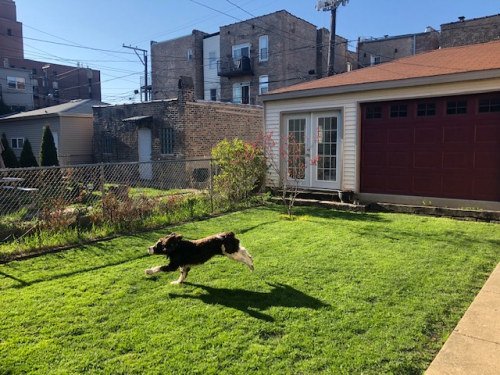