From 5/18/17, originally published at the website of Vital Speeches of the Day. —DM

Lane was a speechwriter and exec comms aide for legendary G.E. CEO Jack Welch for two decades—years during which Welch used leadership communication to “Talk G.E. into Becoming the World’s Greatest Company,” as Lane subtitled a fascinating and instructive memoir, Jacked Up. 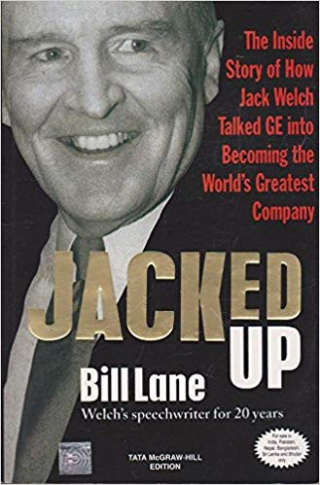 The memoir, in which Lane said he eventually made seven figures at G.E., remains the best example I've ever seen of what it looks like when a CEO and a speechwriter actually believe that careful and candid communication is essential to successful management.

The book is also an obnoxious account of two brilliant, profane, testosterone-slathered men in a corporate culture full of them. I led off a mostly positive review of the book by writing something like, “Jack Welch and Bill Lane are a perfect pair of assholes, who deserved each other.”

Lane, who had spoken at a speechwriting event for me before writing his book, and would go on to appear at another one afterward, wrote to me and cheerfully said it was the best review he ever read.

He said he especially liked the “assholes” part.

The book, if you can manage to see the forest for the toxic masculinity, is an amazing account of what can happen when a leader decides that a company is going to start telling the truth—rigorously, strategically and compellingly.