It is so bad that a sort of grandeur creeps into it. It drags itself out of the dark abysm of pish, and crawls insanely up the topmost pinnacle of posh. It is rumble and bumble. It is flap and doodle. It is balder and dash.

But I guess I'd never seen the whole piece from which it came, which is actually a still-bracing takedown of Harding's speeches—and of speeches in general.

Mencken, who despite his resemblance to the Our Gang character Alfalfa, was one of the very most influential American writers of his time, explains Harding's incompetence as a writer by saying he writes like a—well, like a speechwriter.

When Dr. Harding prepares a speech he does not think of it in terms of an educated reader locked up in jail, but in terms of a great horde of stoneheads gathered around a stand. That is to say, the thing is always a stump speech; it is conceived as a 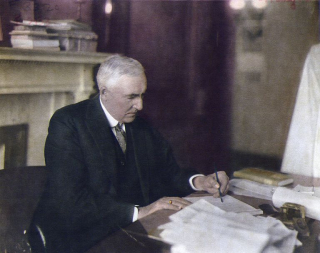 stump speech and written as a stump speech. More, it is a stump speech addressed to the sort of audience that the speaker has been used to all of his life, to wit, an audience of small-town yokels, of low political serfs, or morons scarcely able to understand a word of more than two syllables, and wholly unable to pursue a logical idea for more than two centimeters.

Such imbeciles do not want ideas—that is, new ideas, ideas that are unfamiliar, ideas that challenge their attention. What they want is simply a gaudy series of platitudes, of sonorous nonsense driven home with gestures. As I say, they can’t understand many words of more than two syllables, but that is not saying that they do not esteem such words. On the contrary, they like them and demand them. The roll of incomprehensible polysyllables enchants them. They like phrases which thunder like salvos of artillery. Let that thunder sound, and they take all the rest on trust. If a sentence begins furiously and then peters out into fatuity, they are still satisfied. If a phrase has a punch in it, they do not ask that it also have a meaning. If a word slips off the tongue like a ship going down the ways, they are content and applaud it and wait for the next.

A stump speech set in cold type "maketh the judicious grieve," Mencken writes (13 years before the launch of Vital Speeches of the Day, which went on to set thousands of speeches in cold type). "But roared from an actual stump, with arms flying and eyes flashing and the old flag overhead, it is certainly and brilliantly effective. Read the inaugural address, and it will gag you. But hear it recited through a sound magnifier, with grand gestures to ram home its periods, and you will begin to understand it."

Now Mencken takes a single sentence from Harding's inaugural address, and workshops it:

I exhume a sentence from the latter half of the eminent orator’s discourse: “I would like government to do all it can to mitigate, then, in understanding, in mutuality of interest, in concern for the common good, our tasks will be solved.” I assume that you have read it. I also assume that you set it down as idiotic—a series of words without sense. You are quite right; it is. But now imagine it intoned as it were designed to be intoned. Imagine the slow tempo of a public speech. Imagine the stately unrolling of the first clause, the delicate pause upon the word then—and then the loud discharge of the phrase in understanding, in mutuality of interest, in concern for the common good, each with its attendant glare and roll of the eyes, each with a sublime heave, each with its gesture of a blacksmith bringing down his sledge upon an egg—imagine all this, and then ask yourself where you have got. You have got, in brief, to a point where you don’t know what it is all about. You hear and applaud the phrases, but their connection has already escaped you. And so, when in violation of all sequence and logic, the final phrase, our tasks will be solved, assaults you, you do not notice its disharmony—all you notice is that, if this or that, already forgotten, is done, “our tasks will be solved.” Whereupon, glad of the assurance and thrilled by the vast gestures that drive it home, you give a cheer.

Now, I have a fundamental quarrel with Mencken here. Now less than ever is a speech—especially a stump speech—the right medium to introduce wholly "new ideas, ideas that are unfamiliar, ideas that challenge their attention," as Mencken puts it. That's for the op-ed, the white paper, the essay in the Atlantic Monthly—not the speech, as I argue in my own stump speech, on how speeches and speechwriting are essentially social and emotional devices.

And of course we all believe that FDR, JFK, LBJ, Ronald Reagan, Bill Clinton, George W. Bush, Barack Obama and—well certainly, President Trump—have weaned us off of Harding's sonorous speaking style. (Though ironically Trump at times reverts to it, in teleprompter speeches in which he occasionally utters Harding-esque lines like, "freedom unifies the soul.")

Still, Mencken has a hundred-year-old point that still holds true for speechwriters:

It is not enough to tickle the ear and warm the heart; your words should also strike the eye. And if a speech does not quite stimulate the intellect of the audience, it should not insult it, either.

In short, write to the educated reader in jail rather than the stoneheads around a stand.

Postscript: A wise speechwriter adds, "Can't it be, 'Write to the educated reader in jail AND the stoneheads around a stand'?"