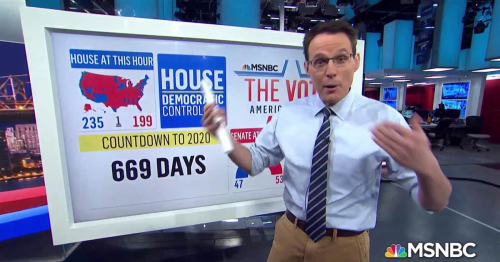 One thing we have a surplus of in this country is poets, accountants, roofers, bailiffs, baristas, graphic designers and dog groomers with supreme self confidence in declaring exactly which Democratic presidential candidate totally is and which absolutely isn't able to beat Trump. (And whether or not Trump will or will not be re-elected.) [And whether the military will take his side when he tries to stay for a third term.]

My mental response to every discussion about election prognostication, after studying the history of presidential elections professionally for twenty-three years is that they are almost uniformly absurd. The majority of the elections I've studied (both primaries and general elections) embarrassed prognosticators in ways that were virtually inconceivable before they happened. Here's Ted Koppel the night after the 1980 election: " what seemed too close to call forty-eight hours ago now seems to have been inevitable all along.” I could provide a dozen examples like that … Yes, there are always "reasons"; but ones that only become apparent afterward. Election prognostication is so much sound and fury signifying not nearly nearly nearly as much as people want to believe it does. I think it's mostly a psychological thing.

A lot of people think President Trump has dementia. You know who has dementia? Motherfuckers who can't remember all the dead-wrong guesses they have made aloud, while boring the red blood cells out of everyone at the drinking table.

I realize we're all beyond cranked-up over this election. Most of us are afraid of what will happen if Trump is reelected (or even if he isn't).

But by responding to that fear by behaving like blustering know-it-alls, supposedly evolved men and women are behaving like stereotypical men.

And you know who stereotypical men are voting for.