I don't write much about sports here, because it's not called "Sporting Boots."

But my speechwriter/humorist friend Eric Schnure was pretty balled up on the phone the other day about the current scandal involving the Houston Astros and possibly the Boston Red Sox using video cameras to steal signs from catchers, to alert batters as to which pitch was coming next.

I hadn't been following the story too closely, so I let Eric brief me on how these teams conspired in a fraud that he said could be compared to the Chicago Black Sox throwing the World Series in 1919. I thought that was a little overboard. The Black Sox scandal involved gamblers paying players to throw games—a true invasion of the game by gangsters, rather than just the usual low-grade criminality normally known as "baseball strategy."

Whereas, this latest thing was just a more sophisticated version of sign-stealing, which has been going on since the first time a pitcher tried to bamboozle a batter.

Baseball is trickery and treachery. That's why we need signs in the first place; because pitchers refuse to tell batters how hard they're going to throw it, or where, exactly. (Sometimes they throw the ball such that it curves! What kind of dirty trick is that?)

If a guy bats right-handed, you bring in a right-handed pitcher to zing the ball away from him. How shabby. If you think a guy might get a big hit, you walk him intentionally. How cowardly. Occasionally, a guy will throw the ball 100 miles an hour at another guy's head. Attempted murder.

Stealing is literally part of the game—and players only resort to that if they can't hit the ball over everyone's heads, out of the ballpark so no one can play with it! Real mature.

There's the "hidden ball trick." The "rundown." The "pickoff play." Baseball players will do pretty much anything, just to keep a fellow human being from getting home.

And now we're shocked and dismayed because ballplayers and managers are adding to the sandpaper, thumbtacks, rosin, pine tar, vaseline steroids, cork and spit they've always used to get ahead, video cameras? 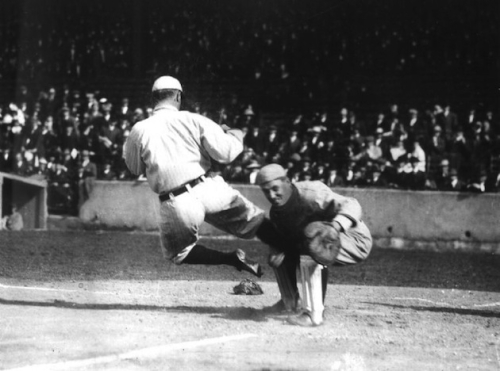 Anyway, that's what I told Eric. I think he thought I was being obtuse.

But I'm pretty sure he told me the whole thing in the first place, just so he could introduce his new names for the Astros and the Red Sox—the Houston Asterisks, and the Boston Red Pox.