Not only is it fashionable to reject the tried and true in favor of the untried and new—actually, that's what fashion is.

And we live in a fashionable time. And the moment anyone over 40 dares to share anything that sounds like advice, or wisdom accumulated from a life of trial and error (and reading and thinking), it's "Okay, Boomer."

Actually, no: That's not the problem. It's the fear of being accused of mansplaining that prevents older men and women from trying to teach younger people what we think we know. I don't mean culturally—we middle-agers run corporations and the movies and the media, and we get our perspectives heard publicly and constantly.

What's got me lamenting this is the best little essay I've read in a while, by the writer Rebecca McCarthy, about the late writer and University of Chicago professor who wrote the book A River Runs Through It. "Norman Maclean and Me" recalls McCarthy's teenage acquaintance with Maclean 50 years ago, when the old professor was summering in Montana, where McCarthy lived. They met through a coincidental family connection. 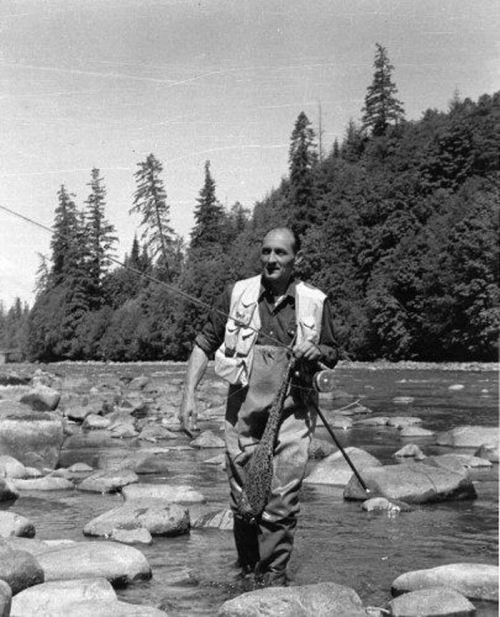 Handed McCarthy's adolescent poems by a family member, the old man read them and told her what was good about them, "telling me things I had never noticed about their rhythm and language."

Seeing her order a Tom Collins before dinner—odd, I know, but so was Montana back then—Maclean later told her in no uncertain terms that's not how it's done.

"Before dinner, you can drink Scotch or bourbon, with ice or water or club soda. With a twist of lemon in the Scotch if you like. Or you can have a glass of sherry.

"A Tom Collins, a gin and tonic, those are drinks for you and your boyfriend after a game of tennis. Not before a meal. With food, you can have wine. And after a meal, you can have another glass of Scotch or bourbon. Or a sherry. Or a cordial, maybe brandy. That’s it, darling, those are your choices."

And he told her that she was not to attend college in Montana, but rather the University of Chicago. "Fuck it, Rebecca," he said:

“Chicago’s the big leagues, darling, but I think you could handle it. You’re a strong, powerful woman.”

Maclean himself had attended Dartmouth:

“But the East isn’t the place for you, Rebecca. The Ivy League is filled with rich men’s sons and daughters. Old money. Secret societies. Joe College. Bastards.”

He shook his head and hissed, “Sssstttt.” The sound was a cross between a punctured tire and an angry rattlesnake. “No, Chicago’s the place for you, darling. A strong, powerful woman like yourself, a poet, they would love you.”

The part about the school blew right over me. What I heard was that Norman considered me a poet. When an adult names you, before the wax is completely dry, the name becomes part of who you are.

Of course that's exactly what people are afraid of—younger people and thoughtful older people—that  influential adults can name you before the wax is dry, and what if they name you wrong?

But what if the elders in a society—the elders in our families, our parents' friends, the old lady at the end of the bar who can see you're holding the stick wrong—don't dare to share their experience at all?

We'll have to get all our wisdom from the Internet, I guess. But YouTube videos do not strong and powerful women poets make.