Beginning when my daughter Scout was on training wheels, I'd she'd ride and I'd run alongside on long adventures—to the Hancock Building, or the Sears Tower and back. I'd guide her across busy intersections, and compliment her on the quality and quantity of her crashes. And when we got back to the garage, I would say, "Well Scout …" and she'd finish my sentence, "We cheated death again."

She's 16 now. Rides her own bike, to "The Ledge," the gratuitously menacing-sounding North Side lakeside spot where she and her friends hang out in the summer.

Last summer, when she was around, I took to riding her around on my motorcycle—short trips around the neighborhood, mostly.

When my sisters read that, they'll be angry. I'll explain to them that my wife allowed it for some reason. Maybe partly because I rode over the Andes a few times, she thinks I can make it safely to the tennis courts at Smith Park, or the burrito shack on Chicago Avenue.

It's a calculated risk.

And there are so many of those these days over which I feel far less control.

Scout is learning to drive in the city of Chicago. There are frequent sleepovers with kids who must not all be teetotalers. There have been boyfriends; and high school girlfriends, just as dangerous. Instagram, and the well-intentioned hundreds of people who like her bathing suits, apparently. And social media sites you can't fathom, new ones every day—one that randomly connects you on streaming video with total strangers like Australian girls your age (yay!) or a man with a gun to his head (what the fuck?).

Almost 10 years ago here, I wrote a piece questioning the parents of a 13-year-old boy who died racing a motorcycle on the Indianapolis Speedway.

I won't berate a father who has lost a son. But to fathers and mothers everywhere, I dare you to challenge this claim: A parent's responsibility is to introduce a child to as much of the world as possible while keeping the child alive long enough to sort out its many splendors. Such splendors include: novel-reading and sonnet-writing, sailing, cooking, snorkeling, kissing, going to church, staying up all night, piano-playing and yes, going fast.

If your 13-year-old son dies while going fast and you say he died "doing what he loved," you are accountable to the questioner who asks, "Did you first introduce him to everything else that he might also have loved?"

In that piece, I referenced an article I could not find, about a seven-year-old girl pilot, who had died trying to fly across the United States, in the 1990s. The turned up recently. It was my dad's, first published in The Wall Street Journal, and reprinted in a newsletter I put out when I was in my twenties, called The Murray Meaning. (Click on article to enlarge for readability.) 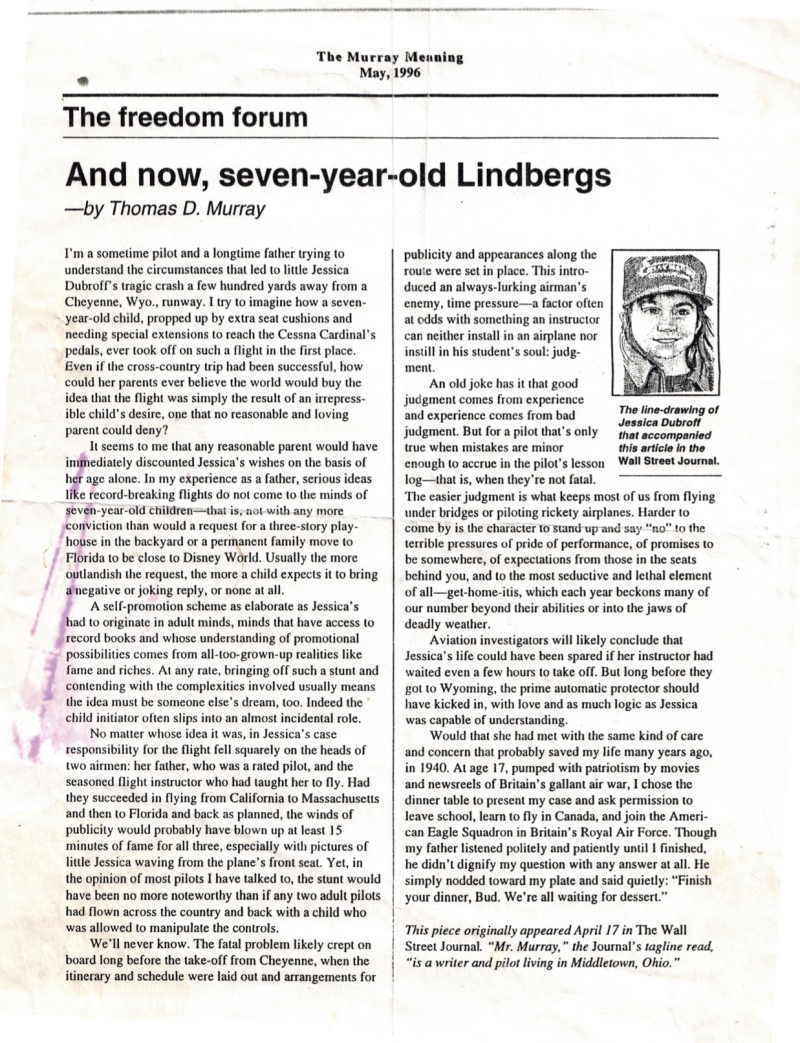 My dad, wherever he is, might be mad about me riding Scout around on my motorcycle. He didn't like me riding one myself.

But he might also understand the real reason my wife has been letting me ride Scout around on the Triumph—and the reason I've wanted to take her myself and she has wanted to go:

Maybe we all sense that Scout could use to spend just a little more time feeling like you can only feel holding onto your dad and going fast—thrilled and safe at the same time.

And me? I remember when Scout was a baby, talking to my buddy Ed Reardon, whose youngest daughter was 20. With a tear in his eye, he told me he remembered clearly the very last time she had really needed him—back when she was 12 or 13. They stood in the Florida surf, surrounded by stingrays. She had her arms around his neck and he held her out of the water.

Thrilled and safe at the same time, for the last time.