Interviewing the author of Holding the Line: Inside Trump’s Pentagon with Secretary Mattis yesterday was like talking to a much smarter version of Tom Cruise. 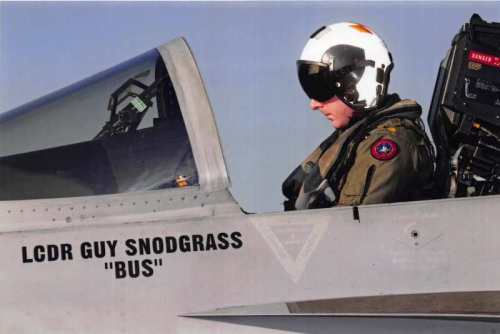 Before Guy Snodgrass served for two years as director of communications and chief speechwriter to U.S. Secretary of Defense James Mattis, he flew Navy fighters in combat and was a TOP-GUN instructor. And before that, he received Masters’ degrees from MIT in nuclear engineering, electrical engineering and computer science.

So where did I come off, giving him such a hard time?

On speechwriters’ behalf, of course. When one speechwriter kisses and tells, doesn’t it diminish the crucial trust all high-profile principals must have in their scribes?

I opened our conversation by reading aloud this item that I wrote for the Professional Speechwriters Association's Executive Communication Report back in early September:

Did you read where former Secretary of Defense James Mattis and other Pentagon folks sought to delay the publication of a memoir by Mattis’ speechwriter Guy Snodgrass? Now Snodgrass is suing the Pentagon, accusing it of favoring the publication of Mattis’ own book, Call Sign Chaos: Learning to Lead, which is out this month. But apparently Mattis objected to the Snodgrass book back in March, when he reviewed a courtesy copy, according to CNN. “I regret that you appear to be violating the trust that permitted you as a member of my staff to be in my private meetings,” Mattis wrote, adding that Snodgrass “would have been in none” had Mattis known he “intended to violate that trust.” We don’t take sides in this legal dispute, but we always worry for the credibility of other speechwriters when a colleague comes out with a behind-the-scenes book, at least in arguable violation of the confidentiality clause of the Speechwriter’s Code of Ethics, adopted by the PSA three years ago: “Speechwriters keep matters involving clients as confidential as the clients demand and expect.” Is that clause itself too demanding in these fluid times?

Now the lawsuit is resolved and the book is out. It’s a thoughtful and well-written account of the writing joys and political sorrows and communication dilemmas of being a speechwriter to a leader in a public hot seat. The book also is what Snodgrass says he set out to create—a useful and credible “two-year history” of Mattis and the Pentagon during the Trump administration.

But you can read about all that in the New York Times Book Review.

But what about the consequences of the book for speechwriters and speechwriting? That consideration, Snodgrass assured me, was among many factors included in the “risk assessment matrix” as he considered whether or not to write this book. (Well, what do you expect from a pilot/MIT grad?)

Because of how he wrote the book—what he put in, and what he left out—Snodgrass claims that “largely the reception has been positive” among the Washington people and former military colleagues he admires. He hopes speechwriters admire the book, too.

Here’s his case, at least, for why they shouldn’t object to it:

First, Snodgrass was surprised by Mattis’ public truculence about his account of their time together. Snodgrass had briefed Mattis in January on what was in the book. Then why the Mad Dog routine in March? Snodgrass told me that Mattis’ public reaction was angrier than his private one, and said the two are still in touch.

Snodgrass added that all insiders know—and all speechwriters who read his book should be savvy enough to ascertain—that there was much about Mattis that the writer left out of the book. “I didn’t talk about the color of his boxers,” Snodgrass says figuratively, while adding literally, “I left out so many things that were behind the scenes—palace intrigue and drama.”

“It would be damaging to the profession” if he were to betray Mattis’ confidence on personal issues or actions,” Snodgrass wrote in an email later. “Simply sharing historical context and a firsthand accounting, most of it open source, feels different.”

Snodgrass also asked rhetorically, “Is there a statute of limitations for the speechwriting profession? I agree speechwriters must honor the trust placed in them—which is why I never ‘spoke out of school’ during my tenure with Mattis, even with other trusted agents.” When the speechwriter leaves the role or the principal leaves the organization or industry, however, “I believe that construct changes,” Snodgrass said.

Further, Snodgrass pointed out he wrote a book that ultimately admires its subject—as opposed to a presidential speechwriter tell-all that he read once where the speechwriter portrayed himself as “the smartest guy in every room … and the president was a dummy.”

Snodgrass sees his book in the tradition of speechwriters like James Fallows and Peggy Noonan, who wrote in constructive and illuminating ways about their years in proximity to power.

And finally, he questions the idea that senior leaders like Mattis get to write books telling behind-the-scenes stories about their colleagues, while staffers like speechwriters are criticized for doing the same thing.

But Snodgrass knows well that clients’ trust makes or breaks a speechwriter’s ability to contribute. As he writes in Holding the Line,

Speechwriting is an odd beast. This was my second time in that role during a twenty-year military career. By no means an expert, I had nonetheless learned valuable lessons along the way, perhaps the most important being that a lead speechwriter needs direct access to their boss, plus direct feedback on what worked—and what didn’t. It just doesn’t work any other way.

Obviously, you don’t get that access if the boss thinks today’s spit-balled brainstorm might make it into next year’s New York Times bestseller. But again, Snodgrass insists that you can’t appreciate how careful he was to stay between “ethical guardrails” unless you know what all he left out and how many senior leaders—“admirals and generals”—he consulted to help him make those calls.

Reading this book, a speechwriter probably can sense the ethical care with which it was written. And no speechwriter has to be told how ethically complicated a high-level speechwriting job is. Snodgrass trusts that speechwriters are more sophisticated than many in the public who think administration leaders and staffers have two choices: “Accept the orders of the president, or resign.”

“It’s not binary,” Snodgrass said. Nor is it always wrong for a speechwriter to write a memoir—just like it is not always right.

Because Snodgrass worked in a public rather than a private organization, because he and Mattis had both left the Pentagon when the book came out, because of the “higher-level” lessons in the book—like Mattis’ uncompromising insistence on the importance of treating allies as partners for the sake of our own security—Snodgrass felt the publication of the book was “more important to write than not to write.”

And having read it myself, I recommend it as more important to read: for the vicarious experience of a high-stakes speech jockey, and also for a primer in the subtle, responsible discretion that all speechwriters must exercise—always, agonizingly and arguably.