Did you know that Kurt Vonnegut once worked in PR for G.E.? In a letter to his father, he described it as "this goddamn nightmare job," and he quit it as soon as he got enough money from his short stories.

But he liked the men he worked with at G.E. enough to keep in touch with some of them for the rest of his life. And he liked the science he learned from G.E. engineers, and based much of his science fiction on it.

And had he not made it as a literary writer, Vonnegut could have stayed in PR his whole life, I think he would have made a meaningful career out of it—just like you. And you and you and you.* 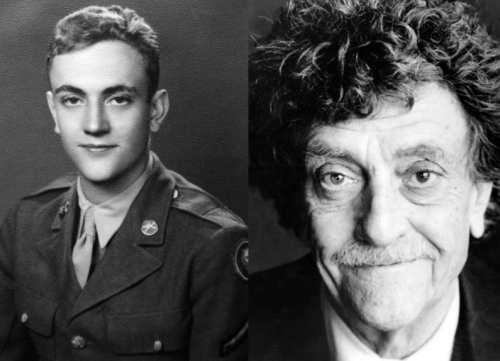 I'm convinced of this after reading "Kurt Vonnegut on Making a Living as a Writer," in The Nation, and weighing its truths against what else I know about Vonnegut (and all the other professional writers I've known for 30 years).

First, Vonnegut was a grinder and an earner first, and a precious artist never. His sister and her husband died in 1958 within two days of each other, and Vonnegut and his wife Jane took in all three of their kids, adding them to their own brood. At one point, he opened a Saab dealership to supplement his income. 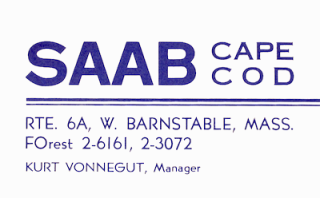 Author Suzanne McConnell, a student of Vonnegut's who wrote the Nation piece, says that Vonnegut understood how to cultivate what she calls "obligatory caring," about one's daily occupation. She says he demonstrates the concept in his novel, God Bless You, Mr. Rosewater. Describing an insurance salesman …

Poor Fred worked like hell for the few dollars he brought home once in a while. He was working now, beaming at the carpenter and the two plumbers in the news store.

Presently, he engages them in conversation about their wives.

“I’ve done what I can for [my wife],” Fred declared. “God knows it isn’t enough. Nothing could be enough.” There was a real lump in his throat. He knew that lump had to be there and it had to be real, or he wouldn’t sell any insurance. “[Insurance is] something, though, something even a poor man can do for his bride.”

McConnell's article contains a great deal of wisdom for people who want to write professionally, and for people who do. (Including some wisdom from speechwriting guru and PSA faculty member Bob Lehrman, another Vonnegut student who's quoted in her piece.)

But nothing here is more important than "obligatory caring."

Real, lump-in-the-throat caring—for your client, for your colleagues, for your organization, for your industry, for your craft or for your cause—if you can't cultivate it in your heart, you simply can't write well over the long haul.

"I tell you," Vonnegut also said, "we are here on Earth to fart around, and don't let anybody tell you different.” (A sense of humor is just as important.)

* Also, I could be wrong. Vonnegut once went to work for the fledgling Sports Illustrated magazine, and spent exactly one morning there, agonizing over a caption for a picture of a race horse that had shied at the opening gun and escaped the confines of Aqueduct Race track. He left for lunch, never to return. His supervisor found a page in his typewriter with the caption, "The horse jumped over the fucking fence."