The truth is, I've never been a big fan of the Q&A portion of the speech. Mostly, questions are either veiled statements or deliberate speaker-stumpers. I'm less of a Q&A fan than ever, now that it's better called the Q,Q&A. Because suddenly, everyone who asks one question, asks two.

"I have a two-part question!"

"I actually have two unrelated questions!"

You would think that no one who has been in the speaker's situation would ask a two-part question. And surely no speechwriter would do it! Yet, many if not most questioners at the 2019 World Conference of the Professional Speechwriters Association last week asked two questions.

Here's what's wrong with the two-part question: You're not only putting speaker on the spot in front of dozens or hundreds of people by asking them a question they may not have anticipated, but you're making the speaker memorize your first question, consider your second, then answer one of them and then (somehow?) answer the other!? Meanwhile, the crowd struggles to focus on the content of the exchange while simultaneously gauging the speaker's ability to juggle chainsaws on a unicycle.

I ask you honestly, customers and colleagues and friends, because I do not know the answer: Is it that you simply cannot decide which of your two questions is more important? Or has CNN's Jim Acosta made it seem somehow unassertive to ask a one-part question? 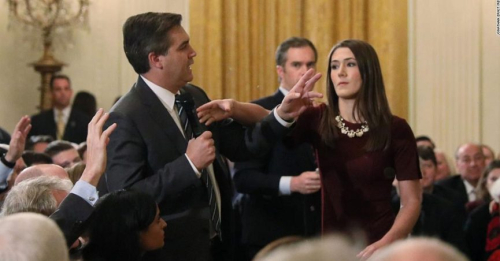 Or is there a third answer: You've simply never been a speaker before and you can't imagine what it's like to arrive, gasping, at the end of a talk you've prepared months for, and be Gatling-gunned to death by the audience, two questions at a time?