Reviewing 11 years of Writing Boots posts to compile my new book An Effort to Understand—which you should pre-order immediately BECAUSE THE DEADLINE FOR DOING SO HAS BEEN EXTENDED TO TOMORROW—I ran across some fun pieces that didn't fit the theme. Like this one, from 2015. —DM

"Leaders don’t need to be true to themselves; in fact, being authentic is the opposite of what they should do," wrote Stanford's Jeffrey Pfeffer in a plainly titled book called Leadership BS. "Each of us plays a number of different roles in our lives, and people behave and think differently in each of those roles, so demanding authenticity doesn’t make sense." 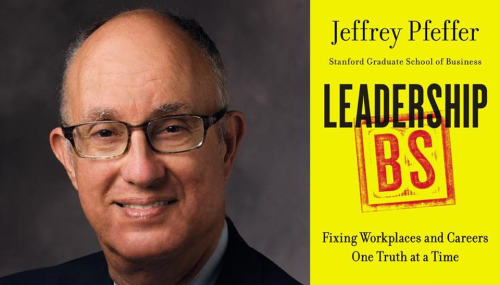 All the namby-pamby cant we hear and repeat about how leaders are most convincing when they're speaking from the heart? Which heart? Pfeffer asks.

"One of the most important leadership skills is the ability to put on a show … to act like a leader, to act in a way that inspires confidence and garners support—even if the person doing the performance does not actually feel confident or powerful."

To me, Pfeffer sounds like he's being purposely disingenuous. I'd love to ask him if he thinks the "role" he plays as a husband or a father isn't any kind of true self—or at least a truer self than the "role" he plays with his students or his colleagues or his administrative assistant. Are they utterly separate roles or just different sides of one soul? Surely he doesn't boil down all of his life's behavior as merely pragmatic reactions to random dramas in which he finds himself? I'm pretty sure a person who felt that way would not write books.

Pfeffer's idea isn't merely simplistic, it also old—too old to be called provocative by anyone who has read Shakespeare: "all the world's a stage, and all men and women merely players."

But the endurance of this sociopathic vision also forces us to acknowledge it. It forces us to question, as Pfeffer does, the almost exclusive emphasis on authenticity that the leadership industry (and also the leadership communicationindustry, of which I must consider myself a part)—has been making too simple-mindedly.

"The leadership industry is so obsessively focused on … what should leaders do and how things ought to be," Pfeffer writes, "that it has largely ignored asking the fundamental question of what actually is true and why."

And this, my friends in and around the leadership communication industry, is where and why we must be careful. Because we wantleadership to be closely tied to authenticity. We want it because authenticity is good and we want to be good. We want to be involved in a noble social enterprise, not a mercenary racket.

But if we believe all the time what we want to believe instead of what is, our counsel will be appropriate to the clients we wish we had rather than the ones we have. And those clients will notice. (And maybe they've noticed already.)

To be effective and moral actors, we must do four things simultaneously: