Reviewing 11 years of Writing Boots posts to compile my new book An Effort to Understand—an autographed copy of which you should pre-order immediately because it's wonderful, not to mention that $19 is almost literally nothing to pay for all the years of daily enjoyment you've already received—I naturally ran across some fun stuff that didn't fit the book's theme. I'll run some of those posts on Thursdays during this promotional month. Let's begin with this confession, from 2012. —DM

I have publicly lampooned bad cover letters written by recent college graduates seeking work. Such letters range, not too widely, from the impossibly callow—"I think outside of the box (without even realizing it)"—to the insanely overeager—"I'm wicked good at successfully multitasking."

And I have been roundly excoriated by readers, many of whom see my attacks on these children as mean-spirited. In my own defense, I have wanted to say, "I criticize from a position of empathy! My post-college cover letters were also impossibly callow and insanely overeager!"

But no one would have ever believed that my letters were as silly as the ones I was lampooning. Maybe I wouldn't have believed it myself.

Cleaning out my writing closet last week, I ran across a notebook containing the first drafts of cover letters written by the guy on the right, just out of Kent State University. 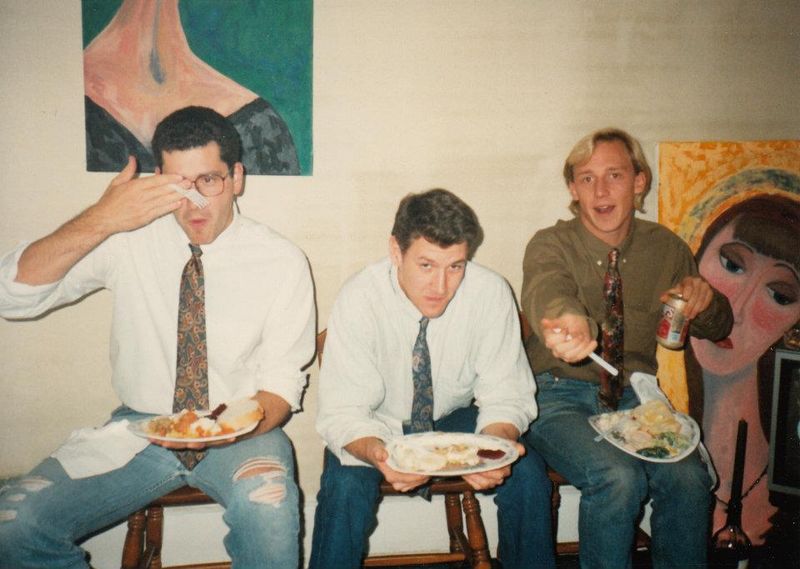 It was the spring of 1992, exactly 20 years ago. I had graduated in December and moved from Ohio to St. Louis to live with my girlfriend, who was working there, selling shoes. I soon convinced her that we should move to Chicago because I'd have a better chance of getting a writing job there and she could sell shoes anywhere.

I started buying the Sunday Chicago Tribune and answering classifieds. I hoped to stand out from the crowd.

Dear Sir,   I am willing to bet that what you're about to read is the first scathing cover letter ever to come across your desk. Please do not confuse the mood of the letter with my general attitude.

At tender twenty-two, I have had it up to here with business. My experience with a single company has provided all the anger I'll ever need. I am a writer, so maybe you already understand. Let me explain, in case you don't.

The other day, I interviewed with an engineering firm [in St. Louis] whose name would only be important if the firm was unique. And if that was the case, I wouldn't bother with this commentary. I'll tell you the story.

The personnel director ushered me into his office … [here, a section is missing, literature lost to history; but the letter continues] …

Obviously, I did not get either the job or even the second interview, only a letter that told me I was "being considered for the position," which I received two days after the secretary told me that the copywriter position was filled.

I want to write for a living. I will do almost anything to achieve that end. What can I do for you? I look forward to your response.

But angry sarcasm wasn't my only rhetorical approach:

I am answering your advertisement in the Chicago Tribune; my interest is in the writing position, not only for the job itself, but for the goals of the Laboratory as well. As a recent student, I have a great interest in the learning and teaching processes.

At Kent State, I concentrated heavily on sociology and psychology, and recognized both the possibilities and the limitations of both fields; and, though vague, I think there is further connection between my knowledge and your needs ….

I write in response to your advertisement in the Tribune. The writer position is where my qualifications and interests lie.

What especially caught my eye was your commentary about the goals of NCREL: "bridging the gap between research and practice." As a recent college student (and a fairly recent high school graduate) I have ideas and opinions and feelings where all aspects of teaching and learning are concerned.

And although I understand my duties as a copywriter would not necessarily include the shaping of the organization's strategy, my passion for the subject makes the job all that much more attractive.

Lately I have been interviewing for various positions in the writing field, but I want to say I gave your's [sic] a great deal more thought and attention. (This, if I may admit it, is the fourth draft.) [A lie.]

Currently I am living in the St. Louis area, but can interview at your convenience, and plan a permanent move to Chicago within the month. You could accellerate [sic] that process considerably. I eagerly await your call.

That call never came—she was clearly intimidated by my willingness to shape the organization's strategy— but one of these letters, not in my records, did actually get me an interview, at a little family-owned newsletter publisher called Ragan Communications. Mark Ragan is the kind of guy who likes a brash young fool. (And in his early thirties, he probably sort of still was one.)

Mark's dad Larry, not so much. Mere weeks after signing on at Ragan, I proposed that I take over the column, on the front page of the flagship publication, that Larry had been writing for 30 years. "I'm pretty creative," I remember saying as the temperature began to plummet. But four years later—four very hard years later—I did take over that column, at the age of 26. I eventually became editorial director there, and then went on to become the illustrious writer whose literary stylings you enjoy today.

So lookee, Young Graduate: Being fresh out of college is a desperate time—probably the most desperate time you'll ever know, and the one reason I would never want to be young again: You've got a degree, you've got some talent, but you have no experience, the economy is crap, and the business world has been getting along quite well without your bright shiny self for all these years.

How can you convince someone to give you a chance? Try everything. Hang in there. Try to keep calm, and remember you only need to find one person crazy enough to hire you. And for heaven's sake, don't listen to assholes who tell you your cover letters are weird.

If I had written sane cover letters, I might have gotten the job at NCREL.

And what would have become of me then?

And perhaps more importantly, what would have become of NCREL?