UPDATE 8/7: Suddenly I'm getting a lot of visitors from a blog called War on Guns, whose gunsplainer-in-chief, "long-time grassroots armed citizen advocate, David Codrea," operates out of my hometown of Hudson Ohio. (Where I learned to shoot, before I found more constructive fascinations.) Here's how he introduces the post, below: "Who better to dictate your rights than morons who think they're smart?" (That's me!) —DM

"These guns," an even-keeled, politically circumspect colleague who almost never swears wrote to me yesterday morning, "are pissing me off."

I knew the feeling.

I'd woken up to C-SPAN, where callers were invited to share their thoughts about the mass shootings over the weekend.

An elderly black caller said the reason for the shootings is that one out of every 10 Americans is a racist. He knows, because of all the white people he's met, that's about the percentage he's seen.

An elderly white caller said these young men are killing people because they don't know history, they don't recite the Pledge of Allegiance, and all they do is fool around with their video games and their cell phones.

Another caller said the problem is mental illness.

Another caller said the problem is too many guns.

Another caller cited his knowledge as a gun owner and pointed out that semi-automatic handguns are just as dangerous as semi-automatic rifles, and that the only reason people hate assault rifles is that they look "evil."

Every one of those callers had a point.

First off, The Bluff is as bogus as it is common. But it's effective, under all but the most extreme conditions. For instance, up to this very day—and despite witnessing many dozens of CNN Shooting & Sobbing Marathons—I've never been tempted to write about guns here, and if you'd have asked me why, I'd have told you, "Gun regulation is not my meat." (But you didn't ask why, because gun regulation is not my meat.)

Secondly? The Gun Bluff is more bogus than the Proust Bluff, the Derivatives Bluff or the Law Bluff. That's because guns, as varied as they are, are not exactly French literature, high finance or codified civilization. They're more like motorcycles. Gun knowledge qualifies you to be a technical consultant on the film, not the fucking director.

And yet, we've allowed the Gun Bluffers to pretty much set U.S. gun policy up to now.

Things aren't going very well. They're going so badly, in fact, that it's time for the simpletons to have a turn—whether the Gun Bluffers like it or not. (As Jim Morrison sang: "They got the guns but we got the numbers.")

Now I gotta warn you, Ph.D.s of Peashooters: Since we are indeed so gun-dumb (not to mention ordnance obtuse), we Bump-Stock Bumpkins are going to make this super simple indeed:

We are going to make it illegal to own anything in this country that's this shape (I drew it from memory, from all the CNN bloodbaths I've seen, not one of which involved any other shape). 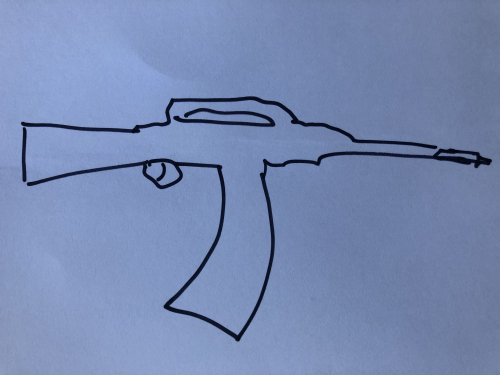 With our ban, we won't care if it's an AK-47 or an AR-15 or an official Red Ryder carbine action two-hundred shot range model air rifle with an erection.

We won't care if it's a Super Soaker or a throw pillow or a water bong or even a crude drawing on an anti-gun blog post.

We won't even care if we forgot to draw the pistol grip on our model, above, which we did.

This shape doesn't occur in nature. Nothing else is even close to this shape (except possibly evil itself).

And we'll maintain this policy for 10 years. Nah, make it 25. Just to see what happens over time.

Because what do we know, right?

Maybe it won't work. Maybe it will.

It'll be fun to find out!

"Let's do something," my old man used to say at times like this, "even if it's wrong."

Does that sound glib and reckless to you? I know the feeling.

Don't think of it as the government coming to take your semi-automatic assault rifle. Think of it as an adventure, involving guns. Isn't that what you've fantasized about all along?

Does that sound presumptuous and condescending? I know the feeling.

Meanwhile, you may use the time you save now that you're not on the shooting range blowing watermelons to bits, studying Proust (who once challenged a literary critic who accused him of being a homosexual, to a duel in Paris!).

"Proust took his shot first. The bullet hit the ground next to Lorrain’s foot. Lorraine then took aim and fired. His bullet went wide of his mark. But two bullets had been exchanged, and the witnesses agreed that with this meeting, Proust’s honor was restored. Proust and Lorrain would continue to hate each other, but this particular issue and the duel that followed, which was reported on in the newspapers, had been publicly laid to rest once and for all."

Bon spectacle, messeirs! That's the kind of gunplay we need to get back to!

Do I sound stupid? When it comes to guns, stupidity is my core competency.