The only Latin my writer dad ever spoke around the house translated to, "We are all the same."

My professional mentor Larry Ragan used to say that when any writer begins to differentiate his interests and feelings from those of his readers, "He's in more trouble than he knows."

Studs Terkel taught me that regular people are as wise as writers—and, with a little encouragement, as poetic, too.

Now, the closest thing I've ever had to a spiritual guide is Muhammad Ali. He didn't know Latin, and because he had dyslexia, he had a hard time reading English.

But he understood communication as well as anyone—and more succinctly, as George Plimpton tells the story in the magnificent documentary, "When We Were Kings" (now, finally, available on demand). In 1975, Ali spoke to the graduating class at Harvard University:

He gave this wonderful speech … It was moving, it was funny at the same time, and there was a great roar of appreciation at the end of it. And then, someone shouted out, Give us a poem! Now the shortest poem in the English language, according to Bartlett’s Quotations, is called “On the Antiquity of Microbes.” And the poem is “Adam / Had ’em.” It’s pretty short. But Muhammad Ali’s poem was, “Me? / We!!” Two words. I wrote Bartlett’s Quotations and I said, Look here, that’s shorter than “Adam / Had ’em.” You wanna put it in? It stands for something more than the poem itself: Me, we. 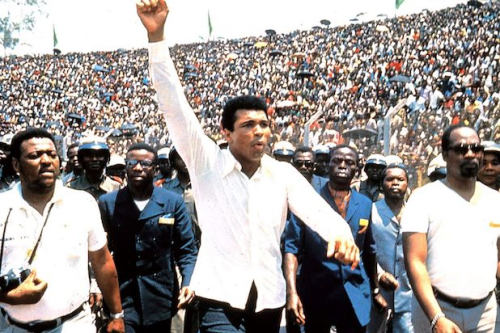