Is there any attribute more important for people you're going to do business with than a sense of humor? It's not that life is too short to spend it hustling alongside the humorless. It's that life is too long.

But the trouble is, you really don't know, until that sense of humor is tested. And usually it's tested—by the way you do business.

My man there was responsive and easygoing during the months he was courting me to do this book, and also the months during which I've asked him dumb questions about how to make the effort work.

But I tossed and turned a little bit last Thursday night after sending the following update to folks who pre-ordered the book and subscribed to the Publishizer updates.

Publishizer stresses the importance of giving these updates as a way to bring followers along on the "journey" toward publication. And we were off to an update-worthy start. But I was worried I'd just be bugging folks who had already given at the office. So I tried to amuse them in the course of the exercise—at the satirical expense of Publisher.

Under the title of, "Thank you from the bottom of my Writing Boots. However …" I wrote:

Dear Supporter of "An Effort to Understand"—

It's been a good week for morale here at Writing Boots headquarters. Thanks to your gracious pre-order and all the others (we're up to 232 after one week of the campaign!), things are really jumping around here. 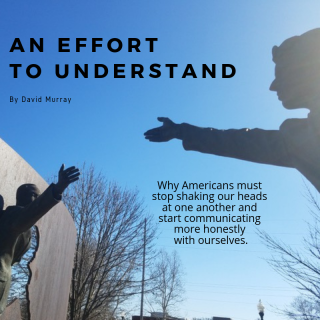 Various Writing Boots employees who haven't so much has made eye contact with me in years—bureau chiefs, rewrite men, fact-checkers, proofreaders, pressmen and the ghostwriting team of Harry Kleekonk and Torlaminda Nudol—are suddenly falling all over themselves asking what they can do to help get the word out about the big book. It's Mr. Murray this, and Mr. Murray that.

I've even noticed a change of tone in the upstairs living quarters. "Great Scott," I overheard my teenage daughter whispering to my wife and one of our cooks on Tuesday, "maybe Father isn't the nincompoop he appears to be." (I appeared in the doorway before my wife could answer.)

The only people not energized by the week's developments, it seems to me, are the people who put me up to this! These Publishizer goons, goddamn them, sound a lot like publishers! "Two thirty? Huh, nice start," my agent says to me, somehow spilling his cigar ashes on the email. I'd like to see HIM get 127 professionally discerning souls to buy 232 copies of a book he merely says he's written!

And all the shared social media posts you've done! And the encouraging words I've received, like the writer I've known for a quarter century, who said, "Cheering you on from the bleachers is a privilege, believe me. How you have nurtured our profession so smartly and so long is remarkable."

My agent doesn't want to hear about any of that. It's all about quantity with these bastards! And odd quantities, at that!

"If An Effort to Understand hits 1000 pre-orders by Saturday 31 August 2019 noon CDT, then it will be pitched to 129 publishers when the campaign ends. … If not reached, then it gets pitched to non-traditional publishers."

How would I know? As my adman dad used to say, "I'm just the dumb writer."

So if you know anyone else who might like to have an autographed copy of this book—(which IS off to a good start, as four publishers have already expressed interest in it, behind Publishizer's locked scenes)—I'd very much appreciate your passing on this link.

And if you have any social media networks you'd like to share it with, I'd appreciate that too.

Mostly, dear colleagues and correspondents, muses and sometime combatants (that's you, family and friends)—I appreciate you, for your belief in me and your stated and demonstrated support of my writing. No matter what happens, I'm looking forward to finishing this book, for you.

And for my agent, who will repossess my 2007 Subaru Outback, if I don't.

His confidence—despite Publishizer being a relatively new business model whose efficacy has been questioned in some quarters and praised in others—that gives me confidence, for the next phase of the journey.

We're now up to 261 pre-orders, and a fifth publisher has asked to talk to me when the campaign is over.

I'll keep you along on the journey, too. As long as you know how to laugh, like me and my man Tré Wee.