Isabelle Gaudeul-Ehrhart suggested back in January that we invite Supreme Court Justice Ruth Bader Ginsberg to speak at the World Conference of the Professional Speechwriters Association. Justice Ginsburg published a collection of her speeches a few years ago, and Isabelle thought she might come to the conference and discuss oral communication. 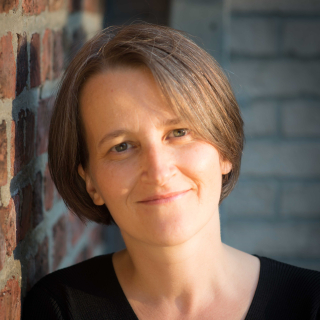 Isabelle is based in Brussels, and I thought maybe she didn't quite comprehend the star wattage of Ruth Bader Ginsburg. I tried to let Isabelle down easy, reminding her that Ginsburg, at the time, was the focus of two feature films and had been diagnosed with cancer.

Isabelle, a founding member of the PSA's Advisory Council, is an astute speechwriter who has worked for both the European Commission and European Parliament. She knows when she is being let down easy, and she doesn't give up easy.

So when the Notorious RBG was cleared of cancer, the Notorious IG-E came right back at me. What else could I do but encourage Isabelle to issue the invitation, on our letterhead?

And Isabelle knows how to persuade; she runs a website that collects and analyzes European speeches: Logos Pathos Ethos.

"Your own words, in this selection of remarks, embody what the members of our Association aim at: through excellence and perseverance, advance ideas and, with their words, one speech at a time, they work for a better world," Isabelle wrote to Ginsburg. "I should add a final reason that moves me into this request: in our profession as in still too many, more and more women join and deliver, but still not enough get to the pulpit and make their voice heard. Your presence would speak volumes."

We sent the letter off, prepared not to receive a response … but somehow believing we would.

This came in yesterday's mail. 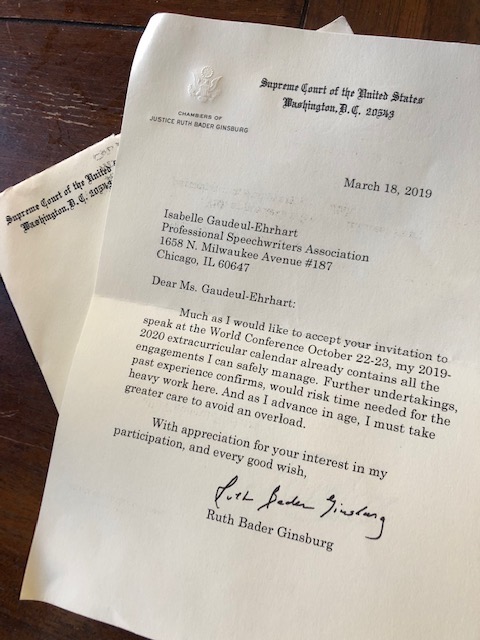 It feels strange to feel such pride, about a rejection letter. But it's exactly what I do feel:

Pride for having built a speechwriting society whose leaders take it—and themselves—seriously enough to reach out to such an eminence as Ruth Bader Ginsburg.

Pride in Isabelle Gaudeul-Ehrhart, who is a person of utter politeness, sensitive consideration, total integrity and stone-cold determination.

And pride in Justice Ruth Bader Ginsburg, who is one American we can all look up to—for similar qualities—at a time when they seem scarce in isolation, let alone in combination.

May PSA members inject these qualities in all the speeches they write, and model them for all the leaders they serve.

Thanks for getting back to us, Justice Ruth Bader Ginsburg.

You inspired us anyway.