Every once in awhile, you get a cabbie who wants to tell you his life story, or a waiter who needs you to know he's an actor, too. Depending on their charm and your attitude, we meet such people with wan smiles in the U.S.—and in most other countries, they're even less tolerated. Yeah, yeah: Just fix the toilet.

Today—on Dominican Republic Independence Day—I'm flying home from the DR, where I got to know so many people whose stateside counterparts would have gone about their business quietly.

Beginning with the government driver who picked my wife and me up at the airport at Punta Cana and drove us more than two hours to Santo Domingo, and then back to Punta Cana when my work was done: We learned about Francis' family, what he likes to do on weekends, his political point of view, his personal philosophy of work and life, and his sense of humor. All this even though Francis speaks less English than we speak Spanish. All this through frantic and awkward work on Google Translate. 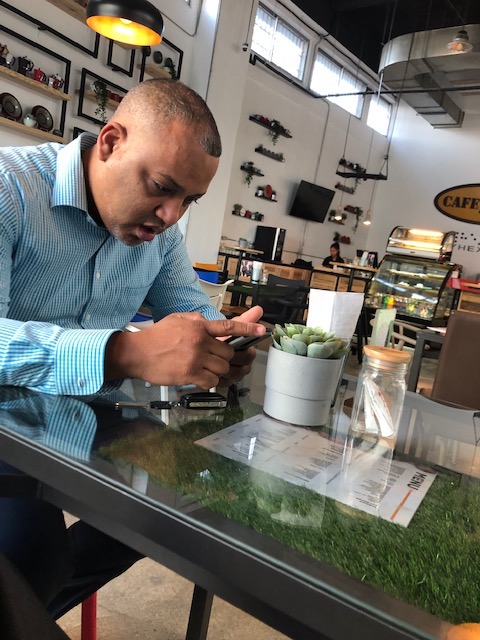 This is not a particular credit to my curiosity, human or journalistic. When we met Francis I was preoccupied about the gig the next day, and when he dropped us off I was exhausted. Had Francis offered silent servitude like so many cabbies and Uber drivers in the U.S., that would have been perfectly fine with me.

In Punta Cana, where we spent a few days in a corporate chain resort called Zoetry—our stay here was compensation for my speaking—we were not charmed by the corporate bullshit behind everyone's first-day greeting, "Welcome home." Uh huh.

We also understood some of the resort workers' initial overtures as traditional island patter. Fifty years ago, my parents used to mimic the accent of a porter at a St. Thomas resort who reassured my nervous mother that she had nothing to fear from the geckos or other native critters: "Nutting on dis island can her-chu."

But I was unprepared for a much more insistent, more personal kind of humanity.

The hostess at the restaurant nearest our villa introduced herself as Maria the first day and asked our names. She pointedly spoke our names every time she saw us, even as we shuffled, sun-dazed and beer-buzzed, in and out of the restaurant. It didn't seem like a form of ingratiating. It seemed like a politely stubborn demand: I am here. I remember you. Sooner or later, you will remember my name.

And sooner or later we did.

On the third morning, I was writing on my second-story balcony—and going well, until I began hearing this repeated hissing sound. Was it a bird? Was it someone splashing a hose on a wall below? I sat there looking up and down and all around. Until I saw Maria, downstairs, laughing. She had been fucking with me! (Who would do a thing like that at an American hotel?!)

At a bar on the other side of this campus, a serious and quietly charismatic bartender named Joaquin was frequently teased by other workers passing by. "Joaquin is a very bad man," one worker told us, detailing a prank Joaquin had pulled on him earlier that day. Joaquin theatrically refused to crack a smile.

Another employee sidled by the same bar. (The workers were unhurried and un-self-conscious about chewing the fat, with one another or with the guests.) His English was especially good and we got to talking about presidential politics here. He was opinionated, and forthcoming. We discussed the Dominican Republic's burgeoning relationship with China, and the displeasure it has brought to the U.S. government. "Because of the Monroe Doctrine," the guy said, and out of my arrogant American poker face popped a "Wow!" Which I lamely covered over by saying it's rare when the Monroe Doctrine comes up in any conversation. (When the guy left, I checked my phone to bone up on the fucking Monroe Doctrine; later he told me he'd spent much of his childhood in Providence, Rhode Island.)

By the time our personal concierge Dio started telling us as we squinted into the poolside sun about his dreams to become a science fiction writer and his frustration at not finding enough time before work or energy after a day of serving customers in the hot sun, I was starting to think this whole country is full of people disinclined to hang their humanity on the hook next to the time clock.

I wonder if Francis will agree with my assessment of his entire nation, based on a few interactions over a seven-day stay, mostly at a resort that caters to Americans.

And I will find out, because Francis and I are Facebook pals, and I bet he'll feed this post into Google Translate, and let us all know what he thinks.

If I know Francis.

Postscript: All of the above was actually written and scheduled before our last afternoon here, when I emerged dazed from a massage to entertain a 90-minute barstool political and socio-historical discourse with Dio, and another session just as long and even more intense with the onetime Rhode Island guy, whose name is Enrique. For our entire last afternoon here, they told stories of a nation utterly transformed over the last 25 years—30-something Dio grew up with his nurse mother washing clothes in the river, educated in a school that only ran four hours a day—and they offered different takes on the current political system, here and in the U.S. both: nuanced, considered and often surprising. (Enrique thinks Trump is terrific, for instance, and blames the Clinton Foundation for "losing" all the earthquake money they raised for the DR's hapless neighbor Haiti. Enrique is also now my friend on Facebook, and he'll probably weigh in here too.) Jesus Christ, how are you supposed to vacation in a place this alive?