Howard Schultz is a three-dollar bill, is how we'd say it here in Chicago, and we'd move onto the next topic. 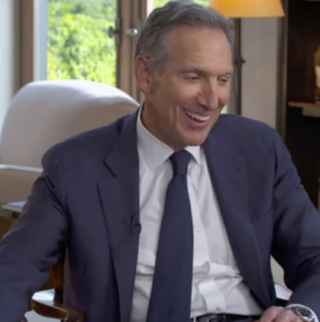 Hunter S. Thompson's stylistic inheritor Matt Taibbi did a more detailed takedown in Rolling Stone, and I enjoyed it because his main complaint about Schultz isn't that Schultz is going to get Trump reelected, or that he's a centrist in a revolutionary moment.

It's that the guy is a platitudypus—like so many other CEOs we know.

Taibbi even calls out Schultz's ghostwriter Joanne Gordon along the way, deconstructing her collaboration with Schultz—his autobiography, From the Ground Up. Taibbi questions the emotional integrity of Schultz's origin story—which he then calls the highlight of the book.

Once you get past the somewhat interesting “avenging my loser Dad” portions, the rest of the book is just collections of clichés lifted variously from the campaign-lit and CEO-bio genres. Schultz’s mind is a giant T-shirt.

He goes to Gettysburg and learns “Experience… is the clay of wisdom.” Entrepreneurship is like “raising a child.” (Forbes alone has done that headline at least twice.)

“Magic,” he writes, “is not reserved for selling pie and coffee. It can extend to any endeavor — like trying to create jobs.”

Which is fine, and frankly, unless you’re the kind of person for whom triteness is a felony, Schultz is more of a bore than a monster. On that last point, though, From the Ground Up is exceptionally dull, so completely devoid of ideas that it’s almost interesting. Schultz makes the Romney family cookbook read like Dante’s Inferno.

Or as we'd say here in Chicago, Schultz's book sounds like a long walk for a short beer.

And honestly, what CEO's story or philosophy would fare any better under a journo-literary gaze that lasted longer than a 20-minute speech at the Detroit Economic Club? With some exceptions, most of them dead—Jack Welch, Herb Kelleher, Lee Iacocca, Bill Gates, Warren Buffett, Steve Jobs—CEOs' personal political platforms are usually the pretty thin product of speechwriters making a narrative mountain out of a hard-earned morsel begged from a busy boss.

A couple of years ago, I did the CEO of the real estate giant Compass the favor of tearing him a bonus bunghole (or rendering him a new rectum, as you wish) after he got up in front of his employees and told what he described as a "deeply personal" story about how his racist grandparents and neglectful father made him into a man who just had to run a huge real estate company, because, "At Compass, we're helping everyone find their place in the world. It's incredibly meaningful to me personally that I have finally found my place here, with all of you."

Rhetorical pink slime, is what it is.

And CEOs can serve that stuff: They're already in charge—and most people who work for them and buy their products and invest in their companies want them to be fine, genuine folks who overcame adversity, as we all feel we have, and who deserve the power they have, as we all imagine we do.

Politicians build and backfill their biographies with every election they undertake and every vote they make. But a CEO who thinks a tidy origin story done in post will cause people to vote for him or her—well, he or she is bound to bore America to death with a stump speech repeating what Taibbi calls Schultz's book: "the boring and insincere autobiography of a pretentious oligarch who probably hasn’t been told to his face he’s full of shit since the first Bush administration."

Or as we'd say it here in Chicago, "This guy isn't worth two tits on a bull."