A speakers bureau's breathless promotion of one of its celebrity speakers—and thus, the cult of celebrity speaker—reminded me of a column I wrote two years ago, about the controversy over a huge speaking fee President Obama received for a corporate gig. Of course he accepted the money, but why did they offer it? I feel an even stronger antipathy toward celebrity speakers today, as I rub my hands together, organizing the PSA World Conference for maximum meaning and long-term impact. —DM 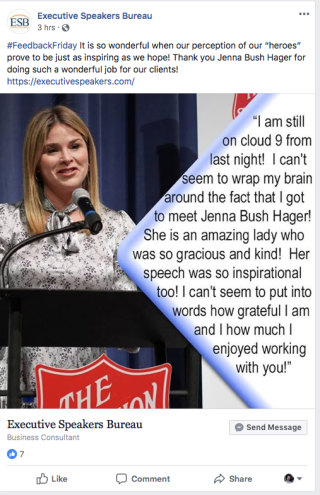 The much more interesting question is: Why did Cantor Fitzgerald offer [Obama] that much money to speak at its conference? Were there no more relevant speakers who might have been had for 1/40th of that?

Or, why did my own alma mater, Kent State University, offer $100,000 for a commencement speech by actor Octavia Spencer, who doesn’t seem to have any connection to the school whatsoever. “Octavia Spencer’s personal journey as one of seven children whose mother was a maid in Alabama, to attend and graduate from college will resonate with our graduates as they themselves accept the challenges and opportunities that await them following graduation.”

Or, let’s make this even more personal: Why do I feel pressure to bring in big names to the World Conference of the Professional Speechwriters Association, despite good advice that I receive from PSA members who tell me that what they want is intellectual nourishment, stimulation and the ideas of fellow speechwriters, rhetoric thinkers and other outstanding, practitioners of our dark art—no matter how obscure.

Most of the instincts that drive event planners to search for celebrities over lesser known but potentially more illuminating lights are not good ones. They include:

• It’s easy. Finding someone smart enough to be truly, deeply compelling to an audience is a lot harder than finding someone who will flatter the audience by his or her name and presence alone. (Jacques Barzun said that recognition is the lowest sign of human intelligence.)

• It’s splashy. David Petraeus spoke at our very first PSA World Conference. Now, Dave had actually been a speechwriter early in his Army career, so he had a lot to say. But his presence on the program sent a one-time, two-word message that needed to be sent at that trembling moment: at the PSA, we were not effing around. Yes, Dave—I appreciated that.

• It’s risk-free. If Stephen Colbert bombs the keynote, you can shrug and say, “Hey, I brought in Stephen Colbert, what more could I have done?” But if you invite some homiletics professor to deliver provocative and possibly irritating insights about how preaching is changing and how speeches need to change the same way—if she bombs, now I’m the horse’s ass. What could I have been thinking?

But it’s dumb. It’s shallow. And in the long run, it’s less effective and less healthy for the institution.

Companies, universities, nonprofits and professional associations will ultimately be strengthened in the long run by inviting people who speak to their constituents’ realities, identities and deep aspirations rather than their vanities. It is those speakers who can galvanize a community in lasting ways with their words and ideas and kindred spirits, rather than their shimmering presence.

The PSA's 2019 World Conference is Oct. 21-23 at Georgetown. Will it reflect the courage of my convictions? You'll have to wait until the program comes out. —DM