I'm manning the Vital Sermons booth at the Academy of Homiletics annual meeting in a hotel basement in downtown Denver. Hitler's bunker boasted a better view of the mountains, and a more emotionally uplifting atmosphere in general.

Homiletics is the study of sermons, and this is a crowd of about 150 homiletics professors—people who teach students in seminaries how to preach. They seem pretty spiritually subdued, themselves.

In fact, they seem very much in their heads. A group of them just walked past my booth and I heard one say casually, "He's the greatest homiletical feminist theologian that I know."

As an exhibitor here, I'm not allowed into the sessions themselves. Only members of the Academy are, and you have to be a homiletics professor to qualify for that. I'm a toothless carnie, trying to get these folks to step right up and give Vital Sermons a whirl.

Even so, you'd think homiletics professors would want to see what sorts of sermons I'm publishing and who's looking at them and how I plan to make homiletics great again.

Practically, I have a lot of time to blog.

And to browse the books on display around here. Some of the titles are clever. I like, When in Romans. Other titles are on the grim side!

Preaching Truth in the Age of Alternative Facts

Preaching in a Post-Soul World: Finding Hope in an Age of Despair

Preaching in the Era of Trump

Microaggressions in Ministry: Confronting the Hidden Violence of the Everyday Church

I've been here three and a half hours and had four conversations—one of them a fruitful one with a homiletics professor who's on our Council of Advisors and who I hope will contribute to our speechwriting offerings. One with a guy who runs an annual festival for young preachers. One with a pastor from Baltimore. And one with the association treasurer, who arranged for me to rent this table. I kept waiting for her to ask me where she should send the invoice.

I understand. I've been in those horrible exhibit halls before, and felt the greedy eyes of hundreds of sales creeps on me, everyone wanting to tell me about their geegaw and sign me up for a free trial in exchange for a plastic kazoo. Except, my booth is the only manned one here, so all that fear and loathing is focused on me. People are walking past me as if I were half-dressed and sitting in a gathering puddle of urine. The old smiling side-eye.

It's OK. We have our press release in their goody bag. I only spent two hundred and fifty bucks for this booth. These really aren't our customers anyway. (In my experience, homiletics professors don't hear many sermons, don't know many preachers and aren't broadly concerned about the popularity of sermons in the America, or about anything else because they have tenure. That might be unfair, as I have no idea what I am talking about.) Also, I came to Colorado to run a military speechwriting seminar at the Air Force Academy in the Springs, and that was totally awesome. I'm also here to see my sisters and nephews this weekend, in Denver and Boulder. And I'm getting a lot of work done here at the booth. And I'm good enough, I'm smart enough, and doggone it, people like me.

Ho, wait up! "Hermeneutics and the Theology of Preaching" just let out, and here comes the mob! They're all surrounding my booth! Now I know how Lindbergh felt when he landed in Paris! Hi everybody! Yes, hello! Please, form a line. I promise we'll get to every single one of you. Madam, I implore you, let go of my jacket! 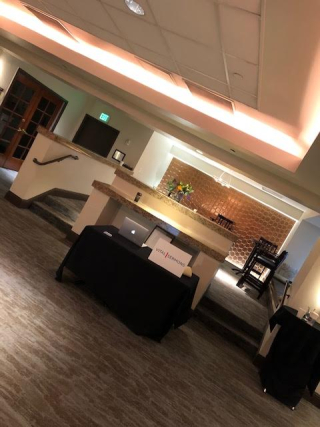 I also sound like a salesman who doesn't quite believe in the virtue of his own product. "Yes, I'd love to tell you about Venal Germans dot com …"

Worst of all, I sound like a salesman whose boss is going to be unhappy with him at the end of the day. Which is exactly what I am.

I realize I should not be blogging. I should be looking at people solicitously and expectantly. I'm letting them off the hook! Would you interrupt a homeless guy on his laptop under a bridge? "Excuse me Sir, I don't mean to break your concentration, but would you mind if I put a dollar in your bucket?"

So I try to look up, searchingly, between paragraphs. And to write shorter paragraphs. Whatever pops into my head:

I am so fat, my back hurts sitting down.

I'm not sure I shaved well enough this morning.

If I was as bad at writing as I am at this who dog think martian wait.

I have to go to the bathroom but I don't trust these theologians with my laptop.

It's cold down here, and getting colder.

I wonder if there's a bar upstairs.

There is no God.

A woman just came up and asked for my "pitch." I told her all about Vital Sermons. And I sold her! On attending the next session of the PSA's Speechwriting School. She's here selling artsy vestment stoles, and she's looking to get out of that racket. Thinks speechwriting might be the ticket. Okay, sure. I'm here to help in any way I can.

Isn't that why we're all here, come to think of it—on the earth, I mean? To help whoever asks us in any way we can?

And if you go where you're not needed, you know it right away.

This is a really unfamiliar feeling for me.

Which makes me a lucky guy.

And a grateful one, too.