A few years ago I noted that Teddy Roosevelt's "Man in the Arena" speech is almost always quoted self-servingly, by men in the arena.

You know what other quote is pap? This one: 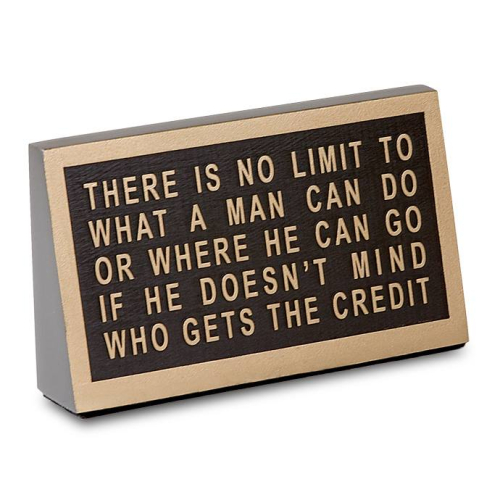 Ronald Reagan used to have that on his desk, in the Oval Office. Reagan, who got the credit for ending the fucking Cold War.

It has been my experience that most men (and women) who actually don't care who gets the credit never do get the credit. (Like all of Reagan's speechwriters except Peggy Noonan, who wrote about two percent of the speeches and got all the credit and became a famous writer and pundit, leaving her relatively obscure former colleagues muttering darkly in perpetuity.)

You know who doesn't get the credit? Project managers, supervisors, quality control engineers, accountants, customer service reps and about a hundred other classes of people who are the backbone of the operation but are nevertheless severely limited in what they can do or where they can go.

The least the guy who does get the credit—and the movie career and the girls and the governorship and two terms in the White House—can do is not repeat that bullshit over and over again to the people who don't.