On a 1,000-mile motorcycle journey on the country roads of middle America last week, I saw a lot, and I had a lot of time to think about what I saw. Time—and these days, good reason. On my first stop outside Chicago, I'm already looking for trouble. And I think I've found it, as the boys at the breakfast counter at Johnny Pamcakes in Rockford, Ill. jaw with one another and the waitress about why they don't "care for" Lebron James. But when they say they prefer African-Americans Michael Jordan and Kevin Durant, I realize I'm the prejudiced one, and I vow to clean my goggles. 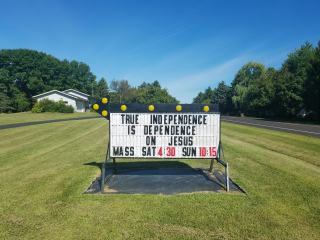 , in Stevens Point, Wis., I smell cut crass and pine needles, and remember the olfactory difference among pig farms and horse farms and dairy farms. People eagerly give me the most detailed directions as if they're grateful for the opportunity to help orally, in the age of GPS. Twenty feet from the road, a young Amish woman hangs clothes on the line. 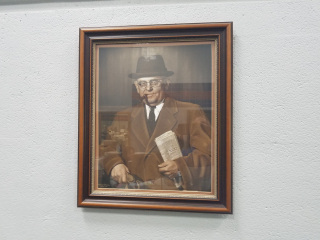 member of the fourth generation of the family whose patriarch founded it in the 1930s, just like Vital Speeches. The great grandson has wanted to work there since he was a little kid, he tells me, and—and with the equal deference he shows to me, his client, and every press operator we talk to—demonstrates, too. For the two hours I'm there I don't stop smiling once.

All of which reminds me that my TV isn't a window. Trump's dystopian America doesn't exist; and also, Trump hasn't ruined America yet, as some of us insist. As hard as he seems to be trying! Whenever I go back to my motel room, Trump is misbehaving in Helsinki or lying about it or trying to change the subject to what a prick his attorney is for recording a call about his mistress. I resolve to stay out of my motel room. Which means I spend a lot of time in adjacent bars, like the one at the Green Mill Restaurant, in Eau Claire, Wis., where two professional road warriors sit next to me drinking for hours, on the general and time-honored theme, The only two people in this company with any brains or balls are you and me.

But I find myself the next noon at the unpromisingly named Drippy Creek Saloon II in Neillsville, Wis., where people assess themselves much more accurately. 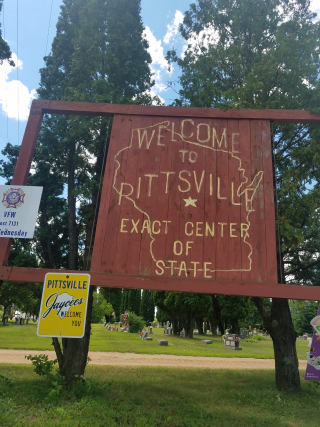 "I'm about half retarded," a regular with a walker parked next to his barstool warns a newcomer. "Since I had a stroke two years ago, I'm not all there." Meanwhile, the owner takes loving time to cook cheeseburgers and baskets of fries that are far better than they have to be, warmly greeting by name every local insurance man who comes in and thanking by name every mother and daughter who go out, just as if it's Mayberry, N.C. 1961. He even makes the stranger feel at home.

I arrive at a Minneapolis suburb of Blaine in time to see my 14-year-old daughter's soccer team play a team from Iceland, in an international youth soccer tournament. The Iceland girls give our girls a severe beating, and us parents a shock, with their pushing, tripping, shirt-pulling violence, and their dirty mouths. They spoke Icelandic to one another, but perfect English to their opponents. Their male counterparts of the same age cheered them on from the sideline making "L" signs with their hands at our players after goals, and grabbing their crotches and trash-talking our goalie until she cried. (Really, Iceland?)

On the way home, I cross the Mississippi River at Red Wing, Minn. and ride about 100 miles down the eastern bank of the Mississippi River. Along that river, you get glimpses of how it looked in 1820, and you understand how the Chippewas must have thought there was no way the white man could take all this land for himself. 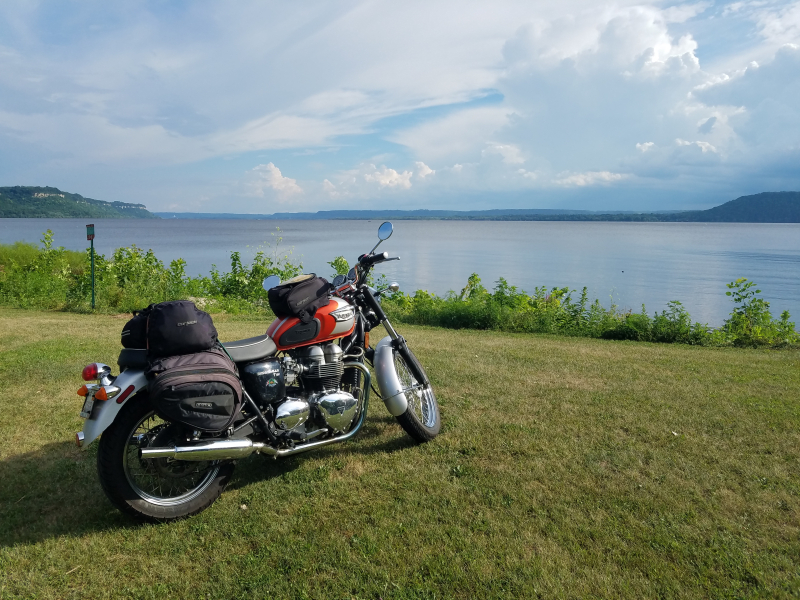 I stop at a riverside roadhouse around happy hour for a breather, but the moment I walk in, I feel all eyes on me. I've felt this way many times before as a stranger in a regular's world. But now I feel this way and I think they all know I hate Trump as sure as that's my Triumph next to all those Harleys. I'm probably being paranoid, but as my grandmother used to say, "Just because you're paranoid, it doesn't mean it wasn't Russia." I make eye contact with no one, chug my Miller Lite and get on down the road. The road, where I must have waved during the course of the week, as motorcyclists do to one another, to more than a hundred Harley guys, who all waved back.

I bed down at a hotel/bar on the river at Trempealeau, Wis., 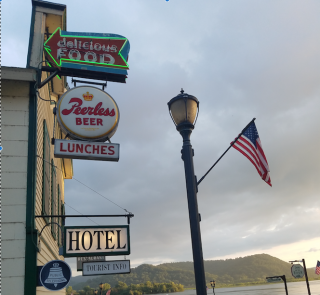 where a self-described "seedy film noir … femme fatale" band called Ex-Bombers from Illinois improbably rocks the house, prompting the sixty-something local woman at the bar stool next to me to remark that, "It doesn't have be all about the new wave, you know." (I replied that I thought the music was interesting. "Interesting!" she snorted, turning away. "Yeah, that's exactly what this is.") 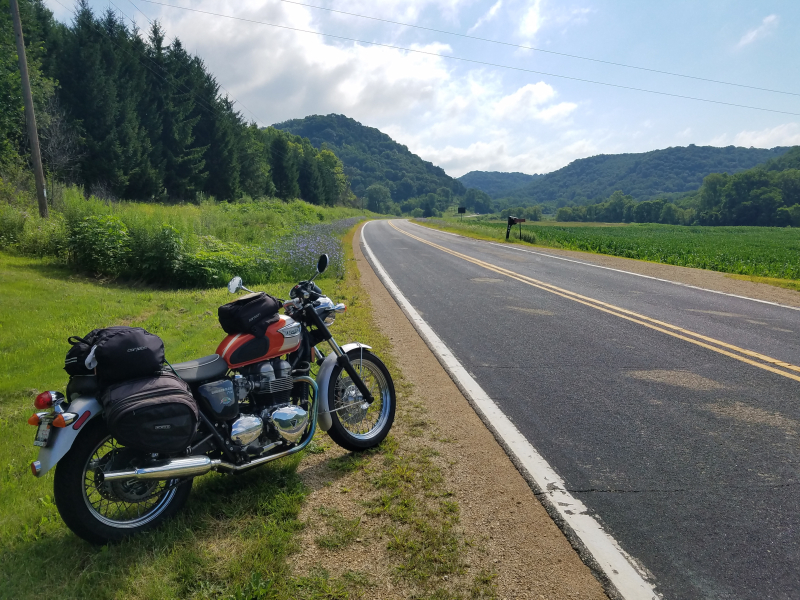 And the moon rose over an open field …