I spent the morning after Donald Trump was elected president of the United States of America replying to gracious, heartfelt condolences and reassurances from speechwriting-biz friends in Europe, UK and Canada. They spoke to us as if we'd been kidnapped by this president and his supporters.

Different circumstances, but the sorts of messages Americans received from all over the world after 911: We are so sorry this happened to your country. We stand by you in solidarity. We will survive this, together. And, in this case, with the occasional offer of a place to live should the whole U.S. shit house go up in flames. 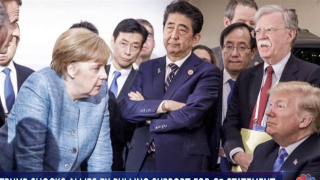 , during and after the G7 meeting in Canada I began to wonder if that will be the case this year. We've already got several non-U.S. folks regstered, but our early-bird deadline is this Friday and the conference isn't until October. So it's much too soon to tell what the total international percentage will be.

We're also holding a Military Speechwriting Training at the U.S. Air Force Academy this fall, and I've got an email into a Canadian military speechwriting maven, inviting her to send her folks. I haven't heard back from her yet, and I'm thinking I picked the wrong week to send that email. (With my follow-up, I'll send her this post.)

And we're holding the first-ever Asia-Pacific Speechwriters Conference next February in Sydney, Australia. Though I can make the case that this is the moment that all sensible speechwriters must gather to talk about global rhetoric in the Age of Trump, I'm not exactly leading with the fact that a U.S.-based organization is convening the event. Anyway, I just got off the phone with one of our partners there, and I couldn't detect any anger in her cheery Australian voice.

But I'm honestly wondering whether the sympathy the world once had for Trumpjacked Americans is starting to give way to a desire to take a little break from us, and send a little message to the boss.

As a convener of a global association and as a human being, I'd absolutely hate for that to be the case. And I could surely argue that the best way to defy Trump is to be as little affected by him as possible.

But after a weekend of the Trump Doctrine ("We're America, Bitch"), I really started wondering: Communicator friends from Canada, England, Scotland, Poland, Norway, Denmark, The Netherlands, Switzerland, Germany, France, Belgium, Australia, Jordan, Botswana, Mexico (or as I call you, the G15)—please tell me:

Has your attitude toward Americans hardened since election day?