Nobody would publish me when I was in my early twenties, and they were taking their sweet time inventing social media. So I published my own monthly print newsletter, called The Murray Meaning. I wrote it (with the help of my younger sister, who was a regular columnist), I laid it out in PageMaker 1.0, I pasted it up, I schlepped it to a printer, I folded it and I stuffed it into envelopes, hand-wrote the addresses of our 50 subscribers and licked all the stamps.

A subscription price covered our printing and mailing costs, and our renewal rates were pretty good— 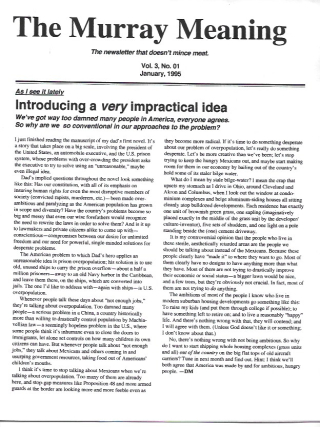 especially for a publication as sophomoric and self-loving as The Murray Meaning was. Some young people need self-confidence. I needed a little discouragement.

So I don't read my old stuff much.

But after reading last week of the Trump administration's plan to put tens of thousands of arrested migrant families on military bases in Texas and Arkansas, I remembered something I'd written back in 1995—an overlong piece that introduced "a very impractical idea." Here's the gist:

"I think it's time to stop talking about Mexicans when we're talking about overpopulation," I wrote. "Too many of them are already here, and stop-gap measures … and more armed guards at the border are looking more and more feeble even as they become more radical."

Let's stop trying to keep the hungry Mexicans out, and maybe start making room for them in our economy by bailing out of the country's hold some of its staler bilge water.

What do I mean by stale bilge-water? I mean the crap that upsets my stomach … when I look out the window at condominium complexes and beige aluminum-siding houses all sitting cleanly atop bulldozed developments …

It is my controversial opinion that the people who live in these sterile, aesthetically retarded areas are the people we should be talking about instead of the Mexicans. Because these people have clearly "made it" to where they want to go. Most of them clearly have no designs to have anything more than what they have. Most of them are not trying to drastically improve their economic or economic status. …

The ambitions of most of the people I know who live in modern suburban housing developments go something like this: To raise my kids (and put them through college if possible); to have something left to retire on; and to live a reasonably "happy" life. And there's nothing wrong with that, they will contend; and I will agree with them.

Instead of shutting the doors on desperate, hungry Mexicans who fit America's ethos perfectly, we should be looking to throw the real American misfits—the contented, the "reasonably happy," and the "fairly well-to-do"—out.

My plan was to start "shipping whole housing complexes (grass units and all) out of the country on the big flat tops of old aircraft carriers." Ship them where? Ship them to Europe, where they have socialized medicine, and where "it's no shame t call everything you do a 'hobby.' … There, we'll be free to 'just live,' without being harassed by intellectuals violating our speed limit just to get a rise out of us."

(That intellectual was me, if you couldn't guess.)

These days, of course, I'm much more like the suburban schlub I describe, who only wants to get himself and his family to the end of life in relative comfort.

Still: I agree with the callow young me that the United States of America runs better on hungry people than it does on sated ones. That Americans at the beginning of a long journey argue less in the back seat, "Are we there yet?" And that most of the people who risk their lives to cross the border are more admirable human beings—and even more American—than a middle-aged dad who watches professional golf most Sundays with the New York Times on his lap and a vodka lemonade at his elbow to calm his anxiety about how a trade war might affect his portfolio.