"I don't think I disagree with you on much of what you wrote," my business owner friend said, "but I sure don't feel as strongly as you are coming off."

We had been exchanging emails about a nationally networked coaching program he's involved in, that helps entrepreneurs figure out what they're best at and shows them how to focus on that, rather than wasting time on the myriad other business tasks that can bog down, distract and dispirit. 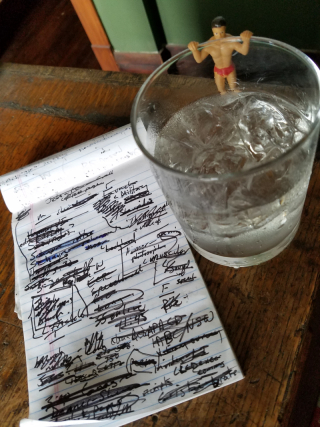 Sensible enough. Until my friend said his program advises, "Don't do any shit work. Have staff handle that."

I've edited the rest of our exchange to conceal my friend's identity, and that of his program, and also some specific aspects of our businesses.

The idea is that you systemize the routine (invoices, travel arrangements, etc) so you can focus and spend time on the exceptional.

We see a lot of banks and hotels doing this—check in via a kiosk so the front desk staff can focus on providing a great and personal customer experience beyond the routine stuff.

One guy in our group says, “If it’s routine, not only don’t I want to touch it, I don’t want to know about it.” He has procedures in place and his staff bugs him only when it doesn’t fit the mold.

There’s another reason why my group says to avoid the routine. (Forgive me if this sounds cult-ish in language or approach.) The program says that your most important job as an entrepreneur is to keep your positivity up … by focusing on … what you love and do exceptionally … it also gives you energy.

2. I consider some “white/blue collar" work good and grounding and occasionally thought provoking. I get some of my best ideas while I’m doing boring stuff.

3. I’m as big a baby as anyone—I get bored pretty easy, and I despise technology and logistics conversations—but I don’t want to be a customer of a business where the CEO doesn’t even want to know about what’s going on below, whether that business is my size or the size of General Motors. That is just plain arrogant if you ask me. And if the CEO feels that way, all the people working for him/her know it.

4. Is anybody in your group “there”—or even close to where he or she wants to be? Here’s what I think is weird about it: I think it assumes a lot of stability and also a lot of limitations surrounding the business.

5. As for doing stuff all the time that you love or that gives you energy—[my first boss] Larry Ragan wrote once that lots of PR people want to spend their days pursing their lips and scratching their chins and offering advice. Most PR people wind up being very disappointed. It’s also possible that building a business wholly around the activities that give you energy … might shape your business, or limit your business, in ways you don’t intend.

My friend wondered why this exchange sparked a "visceral reaction" in me. It's probably because I agonize over this stuff a lot—as I think all business-owners should. But I think that rather than striving for an immaculate freedom, one should seek a balance, so that one is both sufficiently in touch with the daily hum and grind and flesh of the business, and sufficiently removed to see the world beyond.

Such a balance is elusive, I know.  But the immaculate freedom, it seems to me, is a mirage.

How does it seem to you?