Fifty years ago today, Martin Luther King became immortal. So did Robert F. Kennedy, when he shocked a predominantly African-American crowd in Indianapolis by announcing, “Martin Luther King was shot and was killed tonight in Memphis, Tennessee.” And then, as the story goes, Kennedy proceeded to give an eloquent appeal for peace that calmed the people and made Indianapolis one of the only major American cities where violence didn’t erupt. “April 4, 1968: How RFK saved Indianapolis,” reads the standard retrospective in the Indianapolis Star-Tribune. 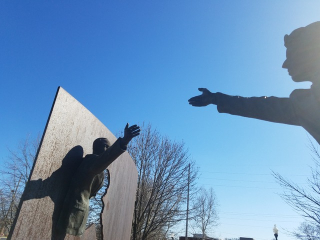 I’ve been telling the story the same way for many years in lectures on rhetoric that I deliver, as editor of Vital Speeches and executive director of the Professional Speechwriters Association.

I love the speech that Kennedy delivered, and so do the audiences I show it to.

But after a visit last month to the site of the Kennedy speech, and a subsequent conversation with a single African-American Indianapolis native who recalls that night, I’ll never tell the story the same way again. From now on, I’ll tell a more complete version, that includes the perspective I heard from William Oliver, an Indianapolis City Councilman who remembers the night very differently, and spoke about it searchingly and carefully.

Here’s how it went down—as it’s recorded by history, and as it’s remembered from outside the rhetorical hagiography.