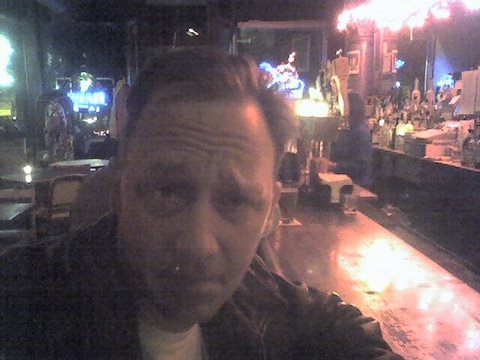 Then, I pretended to both of us to be (a) surprised and (b) saddened by the notion that readers would hesitate to contradict the opinions expressed here.

And I am sorry that there are people who sincerely object to what I say (or how I say it), but who hold their tongue for fear of rhetorical retribution. But the source of my discomfort is that I'm tantalized by two equally attractive possibilities: (1) the unlikely chance that someone can truly enlighten me on a subject I feel sufficiently knowledgeable to write about, or (2) the more likely chance that someone will throw me a fat one at the belt line that I may swat off the facing of the upper deck.

But I object to the insinuation that I ought to write, or react to readers' criticism of my writing, in such a way that would encourage any but the boldest, most confident readers to disagree. I didn't just pick this idea off the rack, fluff it up and hold it up against my breast for approval, motherfucker. Oh, you don't like it? I'll just put it back! I lived about a half century, and thenput this idea forth because I deemed it to be the truth. I expressed it in the style, and with the calibrated vehemence that I, having written a couple millions of public words under my own byline, deemed appropriate.

So though I recognize that you may object to what I have written, and welcome any comment you have, and will probably respond to anything you say … you should accept a high bar for being agreed with. "You have a point," should be considered high praise. "I hadn't considered that"—that should make your day. "You're right. I'm wrong. Thanks for changing my mind."—if you get one of those out of me, you should take the next week off, because I sure will.

An early mentor of mine sold me on the P.T. Barnum editorial plan: If you want to draw a crowd, start a fight. In that spirit, I have written some intentionally provocative things over the years. Nothing I actually didn't believe, but sometimes with the volume turned up, to irritate people, and lure them into saying something intemperate themselves. Now that I am a responsible publisher and friendly association boss, I'm far less likely to write a thing for effect. So if you attack something I have written, you attack something I actually think. Good luck with that. Seriously—good luck.

Now: The point has been made that, however violently I may disagree with a reaction to something I have written on this daily blog, the principle of kindness should guide my response. Hey, I wrote the post for free, in early morning hours or late at night—this one was scrawled in a notebook at an airport bar—in secret from all the people who rely on me to spend my limited energies in sensible and economically productive pursuits. Now you ask that I spend more pro bono time and agony couching replies to quibbling critics in courteous terms? At the risk of cultural appropriation: Ain't nobody got time for that.

The only kind way to respond to a critique I deem dumb would be not to respond to it at all. So—if you do dare to respond—how do you like your correspondence? Hot or cold? Those are the choices.