A version of this piece appeared on Writing Boots in 2011, under the headline, "Finding my way back to the lost train wreck." Every word is true. —ed.

One late afternoon when my neighbors Kirk Morris and Glen Canterbury and I, maybe eight years old, were wandering through the forest near our houses, and came upon a disaster scene.

The wreckage was strewn all over the forest floor. 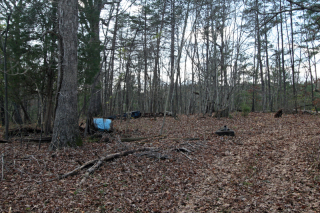 Much of it was unidentifiable, it had been there so long.

But there was broken glass, big pieces of wood, a woman's black-muddy shoe.

When we found the rusty steam locomotive's smokestack, Kirk, Glen and I knew what had happened.

A train had crashed. No one had found it. And then the forest had grown up around it.

We walked out of the woods solemnly and never said a word to anyone about it.

It wasn't until I was an adult that I thought of it again and realized the inherent preposterousness of a lost train wreck.

Which was far too late to stop believing in it.

That's the sort of thing that writers remember—and must remember to render.