When my sister and I went to China, we were in our in our thirties. When we got there, we called our dad from a pay phone in the hotel lobby and told him we were in Beijing.

I know how he felt.

Today my daughter Scout, who has been taking Mandarin since she was in kindergarten about 15 minutes ago, flies to China with a few of her eighth-grade classmates to spend two weeks living with 朱玫 and her family. 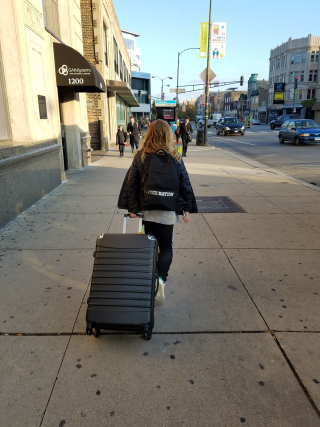 Here's what we know about 朱玫 so far. Her mother is a translator, her father is a "manager." Her favorite foods are pizza and chicken. So far, so familiar. (朱玫's hobbies include drawing, reading, music, writing novels. As the kids say, Wait, what?)

When Scout was seven or eight, I put her on an airplane by herself to visit her aunts in Colorado. When she walked down the jetway with the flight attendant, I turned around and everyone at the gate, who had watched me hug her goodbye, watched me burst into tears.

Having kids is watching them walk away from you, one step at a time.

You get used to that.

It's the occasional great leaps that get you.