Not to change the subject, but one day in late May I tried to find one of the more than 100 videos I've posted on my YouTube channel since I started it around 2008, and I was shocked to see this message. 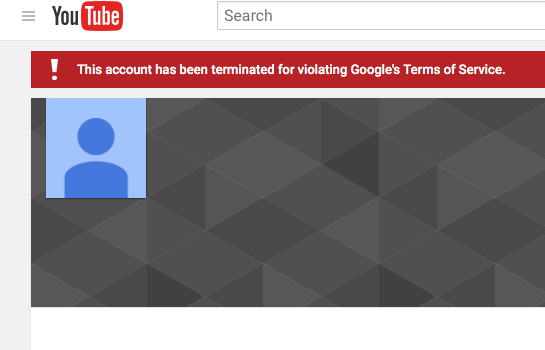 Shocked, because I couldn't imagine what terms I'd violated, and I'd had no communication from Google warning me that I had violated its terms, even though YouTube says directly, "When an account is terminated, the account owner will receive an email detailing the reason for the suspension."

I quickly learned that the thing to do was to file an online appeal, which I did immediately, using an online form. It said I would hear back within—I believe it was 10 business days. I heard nothing, so I called a customer support number. But the person said she wasn't able to help me and that I would simply have to wait for the appeal to work itself out.

So I got in touch with a communicator contact at Google. I wrote to her:

Last week my YouTube account, which I’ve had for more than 10 years and which has more than 100 (precious) videos on it, was terminated without any email notice—and without any previous warning. I have utterly no idea why this has happened, and no way of finding out what happened.

I’ve filed an appeal online … but the person I got on the phone at Google said only that it could be “awhile” before someone could get back to me.

It feels crazy just to settle for that.

I understand this is completly outside your pay grade … but do you happen to have any suggestions? If this happened to you, who would you turn to?

She filed a report for me. "I'm told someone will get back to me in 1 biz day," she said. "We will get this fixed!"

About a week later, I checked back with her. She said she had "several emails out to creator support." There was a complication, in that another YouTube account that I have, which is associated with Vital Speeches but has a few of my personal videos, is still active.

Finally we heard from Frank, in Creator Support. "It looks like it has been suspended as the profile name is found to be in violation of our Google+ policies," Frank wrote. (Frank didn't give his last name; nor did anyone else in Creator Support.)

I immediately assumed I had been suspended for using Google+ to promote PSA events, even though Frank had not specified that. (I was desperate to find a reason for this termination, even if it meant I was in the wrong.) I told Frank I was unaware of a no-promo policy, but that "I will cease immediately to use it in this way."

Frank thanked me for writing back, and said he'd "escalated the issue to our specialists and will circle back as soon as I hear from them. In the meantime, feel free to write back in case you have any other concerns. I'll be glad to help!"

Confident the problem was on its way to being resolved, I wrote to the speechwriter and thanked her profusely, saying, "I will find a way to thank you for your help. If Kafka had had you in his life, he wouldn't have written The Stranger."

Next, I heard from Max, also from Creator Support. He asked for "some more time to investigate this," and thanked me for my "patience and understanding."

By now it had emerged that my self-promotion on Google+ wasn't the violation, but something else that Max couldn't or wouldn't simply tell me in an email.

On July 5, I heard from Nick, in Creator Support. He tried to walk me through a different online appeal process, but I couldn't make it work. "Is there any chance to walk through this stuff with someone on the phone?" I wrote him. "I really appreciate your email responses, but it just seems like we could get faster resolution if we could use the phone."

"Thanks for writing back and sorry to hear that you haven't got any notification citing the reason for your profile suspension!" Nick emailed. "Although we currently don't have phone support, I can certainly clarify it for you here."

But what he suggested did not work for me this time either. So I wrote back: "I believe I may need more help than this email chain can provide, even with your friendly responsiveness. But I'm willing to communicate in any way that will provide the answers I need, and allow me to appeal this suspension (which I already did, about a month ago, but have heard nothing back). Nick, can you help me?"

A few days later I wrote to Nick again: "I haven’t heard from anyone since I sent this email on Tuesday. In fact, I haven’t heard from anyone since July 6. What am I to think about this? As I have said repeatedly, these videos are PRECIOUS to me, and I simply can’t allow them to disappear without warning, explanation or resolution. If I don’t hear from you by COB tomorrow, I plan to ask my lawyer about my options in this matter."

But really, wasting my lawyer's time is a last resort. Actually, it's the resort after the last resort. I am not going to sue Google. So instead, I sent the whole email thread to another communicator at Google—a higher-up communicator, whose name I also won't reveal, because I think he has done his best by me.

"Oh, man—this does not look fun," he said. He promised to send the thread to "a couple of folks." A couple weeks later, he had still not heard back, and he said he'd "re-ping" the people. That was July 31. That's the last I heard.

I told told him then that if the issue doesn't get resolved, "I'm fixing to write a piece about this utter craziness." He didn't ask me not to.

But the truth is, I've hesitated. Google owns my intellectual property and my means of communication. Which means Google owns my livelihood. Google has the power to erase all the videos I have ever made—among other things, you could watch my daughter grow up on YouTube—without ever telling me why. What else does Google have the power to do?

I'm not comforted by Google's "don't be evil" corporate motto. Not because I think there are evil people at Google. But because institutions sometimes do evil things collectively, despite the good intentions of the people who work there. Especially institutions with lots of power over our lives. "Don't kid yourself," I heard a privacy expert say recently. "Google knows everything." If you know everything, you own everything.

It is possible that publishing this post was not a good idea. But I just felt I had to do it before turning to the grim task of exporting more than 100 videos from my old Flip video program onto my desktop, and uploading them all to … Vimeo, I guess? And then I suppose I'll re-imbed Vimeo videos in many dozens of articles and blog posts they were associated with?

I guess I'm hoping someone at Google will see this post and help me.

Which I'm really not, actually.